This is a short and friendly rant against the use of the term “dark matter” in microbial ecology to describe microbial populations we know little about. If you have better things to do, this is the time to go back to them.

Why even waste time on writing this

There are two reasons why I decided to write something about this matter and take the risk of annoying some friends and colleagues I respect (smiley). One of them is rather philosophical.

There is no critique in science (...). You can't actually say, "This doesn't mean what people say it means." You’ve got to be "positive;" you've got to be moving the program forward all the time. I don’t think that is right.
Ford Doolittle

This is a quote from The Philosophical Approach: An Interview with Ford Doolittle by Jane Gitschier that I largely agree with. We mostly complain about things in our labs to people we work with, and the criticism rarely exceeds the boundaries of those safe spaces even when it should for everyone’s sake. I decided to write this post partially to not do that, and put this out somewhere public. This does not mean that I am not excited about the science I will criticize indirectly, in the contrary, I take the time to criticize it because I find it exciting.

The other reason behind this post is purely practical. I have been seeing the term “microbial dark matter” in the field a bit too often recently. In fact it came to a point where a soil microbiologist colleague of mine sent me a paper to edit, and the title of the draft had “dark matter” in it. I thought I could post this out in the open, so my friends and colleagues who may care can have a different opinion.

Why “microbial dark matter” is a poor analogy

It seems the term was first appeared in a PNAS paper:

(...) It has been estimated that <1% of bacterial species have been axenically cultured, and fewer than half of the recognized bacterial phyla include cultivated representatives (1). This can be viewed as biology's "dark matter" problem: just as astronomers can only indirectly infer the existence of a large amount of as-yet-undetected mass in the universe, microbiologists can only estimate microbial diversity by using techniques such as comparative 16S ribosomal RNA (rRNA) gene analysis (2), community DNA hybridization efficiency (3), and metagenomic gene inventories (4, 5) (...)
Marcy et al.

I know it is all good intentions –and I don’t have ill-intentions either, BUT … just as astronomers? Really? Right before listing all the techniques that allow us to quite directly infer the existence of all those populations? I’m sure an astronomer who is trying to wrap their mind around what does this even mean would have been even more baffled when they realize that soon after this paper, He et al. successfully cultivated a member of the phylum Marcy et al. described as a part of the biological “dark matter”.

The dark matter in physics takes you into an intricate and elaborate domain of science that needs this term to fill a quantifiable gap. In fact, if you want to have a glimpse into the dark matter in physics, I suggest you to go through these series of lectures put together by Mariangela Lisanti. The dark matter in physics is a place holder for a not-yet-characterized form of matter that is distinct from ordinary matter, neutrinos, and dark energy as it does not emit or interact with electromagnetic radiation, hence can’t be directly observed by any means. On the other hand, the dark matter in microbiology describes microbes that are right in front of us. We can lyse them, we can see them under our microscopes, we can get pieces of their genomes sequenced, and we can occasionally cultivate them.

You would barely have enough of a scientific story to write about if you were to stick a swab in your mouth and reconstruct a genome or cultivate a member from the “dark matter” of the human oral cavity. But if you manage to do something that is even remotely comparable to this in physics, such as bringing something from the realm of weakly interacting massive particles into a computer screen or a lab bench, you would instantaneously become a legend in our journey in understanding the universe.

Why should we stop using it

The most straightforward reason is to respect the meaning and boundaries of scientific terms and let key terms to remain remain specific enough in public mind to concepts that took many scientists develop over many years.

It would be very naive of me to expect a blog post that doesn’t even offer a fancy alternative to this term to appeal to your consideration, especially after hundreds of mentions of “dark matter” in research publications. But if you think one is not enough, but two may have done it for you, here is another one from Iddo Friedberg on the same topic.

I am aware that “dark matter” is definitely a catchy term. You may suggest that you already know that the dark matter in physics is not the dark matter in microbiology, yet this is a good way to cultivate public interest. I see the opportunity there, yet I still don’t think we should piggy back on it. Because people who know that the term is not relevant to microbiology and yet use it to communicate the importance of studying the microbial life to the public anyway, inadvertently rely on the ignorance of their audience. It is the opposite of the purpose of communicating science.

But even though it is not appropriate, one may still argue that the use of “dark matter” has value when speaking to the public. It is a very sad argument, but OK, regardless of its validity, there is an argument for that part. Meanwhile, I can’t think of any arguments that justifies why scientists would use it to communicate their findings to other scientists in peer-reviewed articles. Because there is absolutely no reason why one can’t simply say what they mean by “dark matter” in an article instead of saying “dark matter” without any scientific basis.

But even when we have a chance to correct the record, we seem to fall into the local minimums of our bad vocabulary. You can see an example to that in this review written by Chris Quince et al. for Nature Biotechnology, “Shotgun metagenomics, from sampling to analysis”, and my tongue-in-cheek attempt to offer an edit to their description after the publication of the paper: 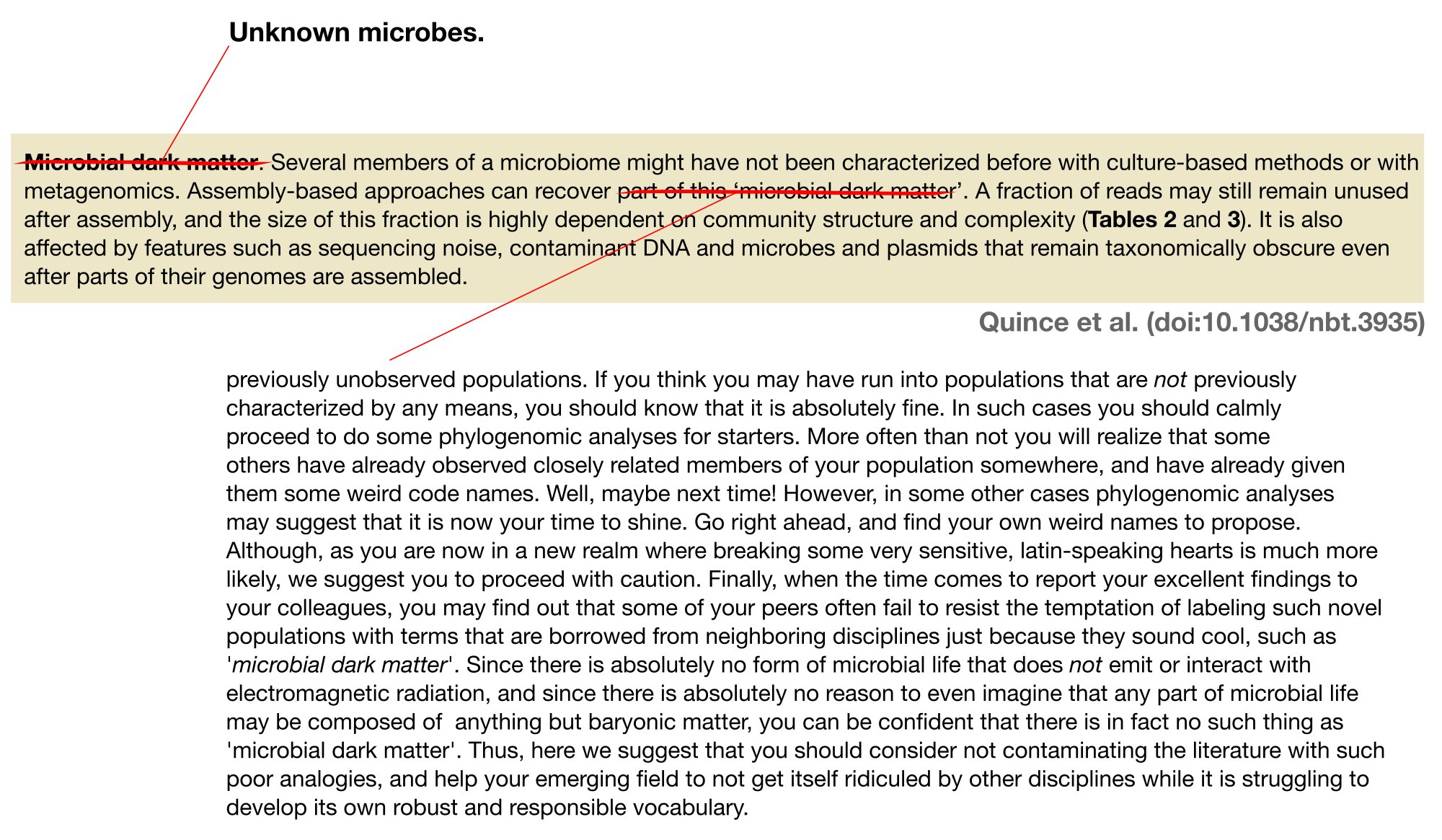 The joke aside, I think we can all benefit from being more explicit :) Especially in a field that is growing so fast that even the terms we all commonly use mean different things to different groups, cutting corners with poor analogies like “dark matter” reflects badly on us, and hinders our ability to develop a robust and responsible vocabulary.

On a lighter note, I was talking to Antonio Fernandez-Guerra of the Max Planck Institute on this topic, and he showed me one of his slides for his talks: 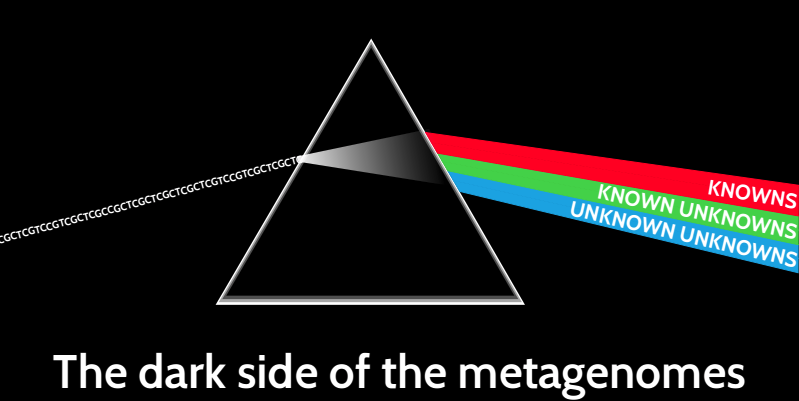 I love it. I guess we can all agree that the dark side is the best side as the many secrets of the microbial life hide in the dark corners of complex metagenomes for us to continue exploring.

OK. The rant is over. You can now back to work. But maybe put your headphones on, and let this play in the background while Antonio and his colleagues’ journey into the darker side of metagenomes in his post, “Welcome to the Dark Side of Genomes and Metagenomes” to see how darker corners of life can be studied without having to say things that do not really mean anything.