During the Deepwater Horizon oil spill in the Gulf of Mexico in 2010, about half of the leaked oil did not reach the surface and instad formed a ‘plume’ in deep sea. Multiple studies have shown that microorganisms affiliated to a single bacterial lineage (within the family Oceanospirillaceae) dominated the oil plume soon after this major environmental disaster started.

These microorganisms have not been isolated but three large metagenomes have been generated directly from oil plume samples and the surrounding water by Mason et al. (2012), providing an opportunity to study the genomic content of populations dominating this environment.

Using CLC for metagenomic assembly, and anvi’o for binning and curation, we first characterized a highly fragmented and incomplete population genome from the co-assembly of these metagenomes (Eren et al., 2015). We named this 1.07 Mbp long and 58.3% complete population genome DWH Oceanospirillaceae Desum (or DWH O. Desum, with an unknwon genus name), and claimed it represented the most abundant bacterial population in the plume.

More recently, DWH O. Desum was at the heart of a little exchange in PNAS, which motivated us to get a better population genome using a newer assembly algorithm, since things have changed a lot since 2015. After performing both co-assemblies and single assemblies using multiple metagenomic assemblers, we selected one workflow that allowed us to recover a population genome of DWH O. desum with substantially improved quality: metaSPAdes assembly of the Distal metagenome, followd by binning and curation with anvi’o.

The remaining of this blog post will describe our semi-reproducible workflow and general trends of the population genome that once dominated the oil plume.

It is only ‘semi-reproducible’, becaue it assumes you have the metagenomic short reads from distal, proximal, and control sites published in Mason et al. in your work directory. If someone ever needs a fully reproducible version of this workflow, and feel too lazy to download the metagenomes themselves, they should e-mail Meren, and he will make available compressed archives for short reads.

You can download a copy of DWH O. desum v2 (a 2.81 Mbp long, 97.1% complete and 0% redundant near-complete population genome), and cite it in your work through this DOI:

You can download the anvi’o contigs database and the merged profile database here:

Contents of the package above is the result of the workflow detailed in the rest of this post. It simply gives you acceess to the read recruitment results from three oil spill metagenomes that are used to recover the population genome among other sweets.

Analyzing a metaSPAdes assembly of the Distal metagenome

We analyzed the metaSPAdes assembly output and the mapped reads altogether using the metagenomic workflow of anvi’o v2.4.0 (the entire analysis took about 2 days).

What follows is a brief summary of our reproducible workflow.

Both the tetra-nucleotide frequency and differential mean coverage of scaffolds across metagenomes are instrumental to accurate binning of scaffolds into metagenomic bins.

To prepare for the binning step, we first removed scaffolds too short to produce a reliable tetra-nucleotide frequency using the program anvi-script-reformat-fasta, and then used the program anvi-gen-contigs-database with default parameters to profile all scaffolds and generate an anvi’o contigs database that stores the nucleic acid sequence, tetra-nucleotide frequency, GC-content, and the coordinates of genes Prodigal v2.6.3 (Hyatt et al., 2010) identified:

This created a FASTA file, ASSEMBLY-1K.fa, containing 6,123 scaffolds longer than 1,000 nt, from which, we generated an anvi’o contigs database:

We used the program anvi-run-hmms to identify genes in the CONTIGS database matching to archaeal and bacterial single-copy core gene collections (we also identity rRNAs without relying on gene calls during this step) using HMMER v3.1b2 (Eddy, 2011):

This step stores single-copy core gene hits per scaffold in the corresponding anvi’o contigs database, which becomes instrumental to assess the completion and redundancy of bins in real time during the manual binning and refinement steps in the anvi’o interactive interface.

Aside from the tetra-nucleotide frequency and differential mean coverage of scaffolds across metagenomes, the taxonomy of scaffolds can in some cases be used to improve the metagenomic binning.

We assigned taxonomy to genes in scaffolds in three steps. First, we used the program anvi-get-dna-sequences-for-gene-calls to export nucleic acid sequences corresponding to the gene calls from the anvi’o contigs database. Then we used Centrifuge (Kim et al., 2016) and an index of NCBI’s nr database to assess the taxonomy of genes, and finally used the program anvi-import-taxonomy to import this information back into the contigs database.

The URL http://merenlab.org/2016/06/18/importing-taxonomy serves a detailed description of these steps.

The recruitment of metagenomic reads is commonly used to assess the coverage of scaffolds across metagenomes, which provides the essential differential coverage information that is employed by anvi’o and other binning approaches to improve metagenomic binning.

Here, we mapped short reads from each of the three metagenomes onto the scaffolds using Bowtie2 v2.0.5 (Langmead and Salzberg, 2012). We stored the recruited reads as BAM files using samtools (Li et al., 2009).

We first need to create an index of the FASTA file:

And this is how we recruited reads from the distal metagenome using the reference above:

Here is a summary of mapping results:

After recruiting metagenomic short reads using scaffolds stored in the contigs database, we used the program anvi-profile to process the BAM files and generate anvi’o profile databases that contain the coverage and detection statistics of each scaffold in a given metagenome:

Here is the profiling of reads from the DISTAL metagenome:

Please read the following article for parallelization of anvi’o profiling (details of which can be important to consider especially if you are planning to clusterize it): The new anvi’o BAM profiler.

Once the profiles were generated, we used the program anvi-merge to generate a merged anvi’o profile.

An anvi’o merged profile database contains the coverage and detection statistics for each scaffold across multiple metagenomes.

We generated the merged anvi’o profile the following way:

We then transferred the anvi’o files we have generated into a laptop, and used this program to invoke the anvi’o interactive interface for manual binning:

Here is the view of the assembly and mapped reads from the anvi’o interface (it literally took a few seconds to select the population genome we were looking for and learn about its key statistics): 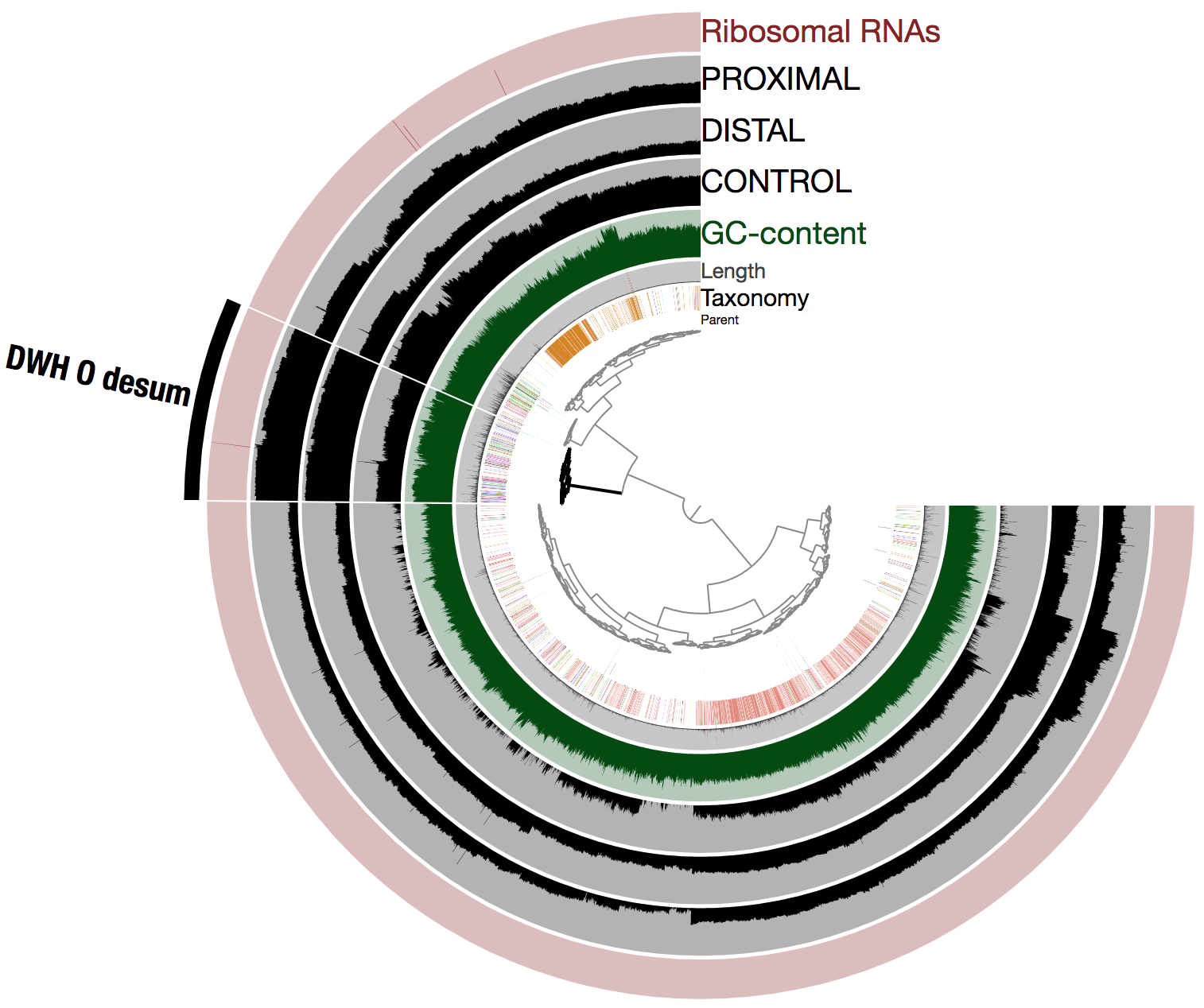 Note that anvi’o produced the tree at the center using both sequence composition and differential coverage. In addition to the taxonomy (determined using Centrifuge) and GC-content, three layers display the mean coverage (in log10) of each scaffold across the metagenomes. The selected cluster contains 526 scaffolds (note that all 6,123 scaffolds are displayed in the figure) and corresponds to DWH O. Desum. Let’s call it DWH O. Desum v2 to avoid any confusion here.

To better understand the remarkable abundance of DWH O. Desum in the oil plume, here is the same visualization using the raw mean coverage values (i.e., not in log view): 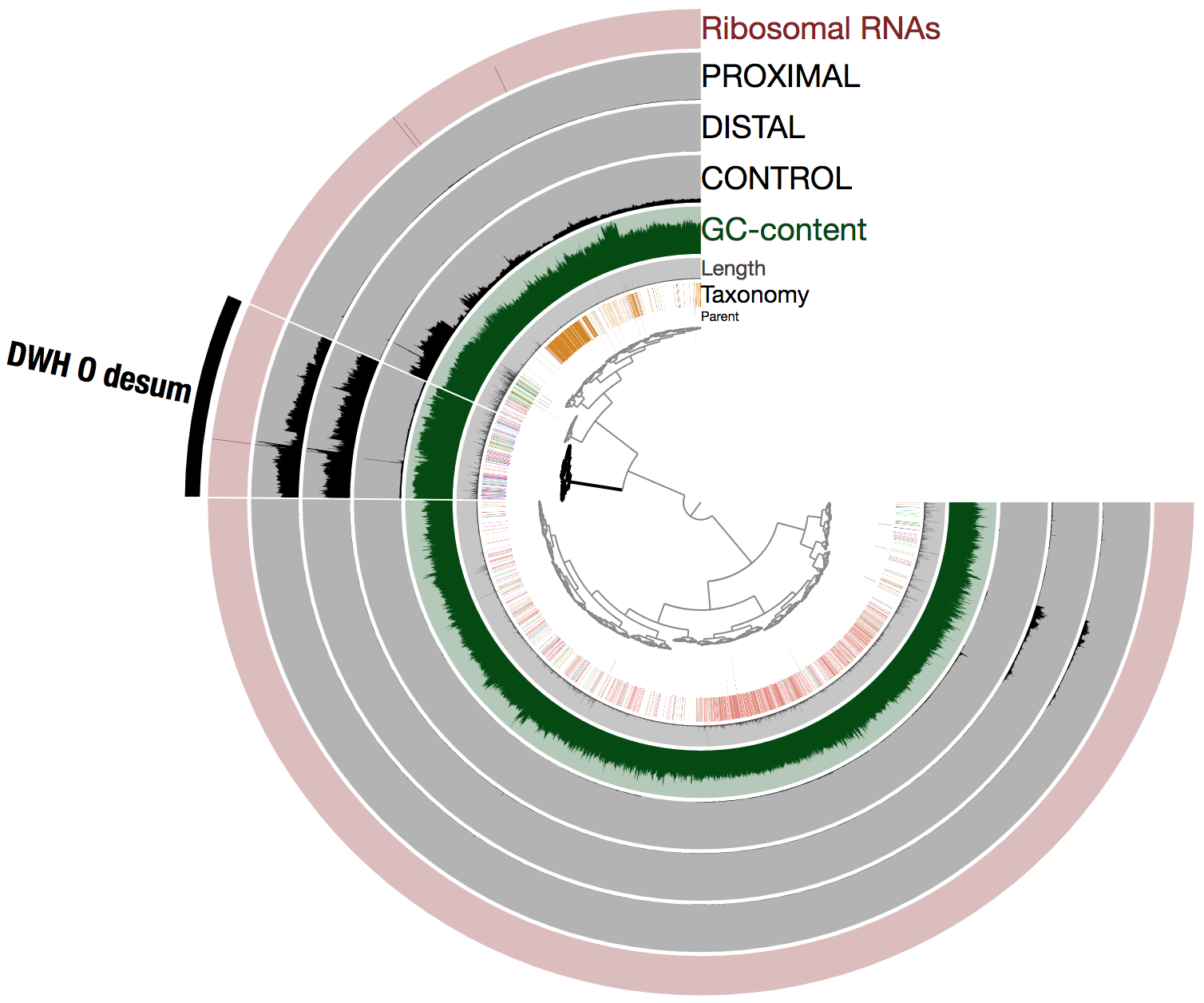 The coverage variations observed between scaffolds of the population genome within each oil plume metagenome (one could intuitively see this as a sign of low quality bin) are likely due to the cumulation of two factors: blooming state leading to a high rate of genomic replications, and the emulsion PCR used to generate the metagenomes. Nevertheless, this did not prevent us from recovering a high quality population genome (with respect to completion) using in part differential coverage across metagenomes to produce the hierarchical tree.

To further support the accuracy of the population genome, we used the anvi-refine program to visualize the 526 scaffolds corresponding to DWH O. Desum v2 using sequence composition only:

And here is the display: 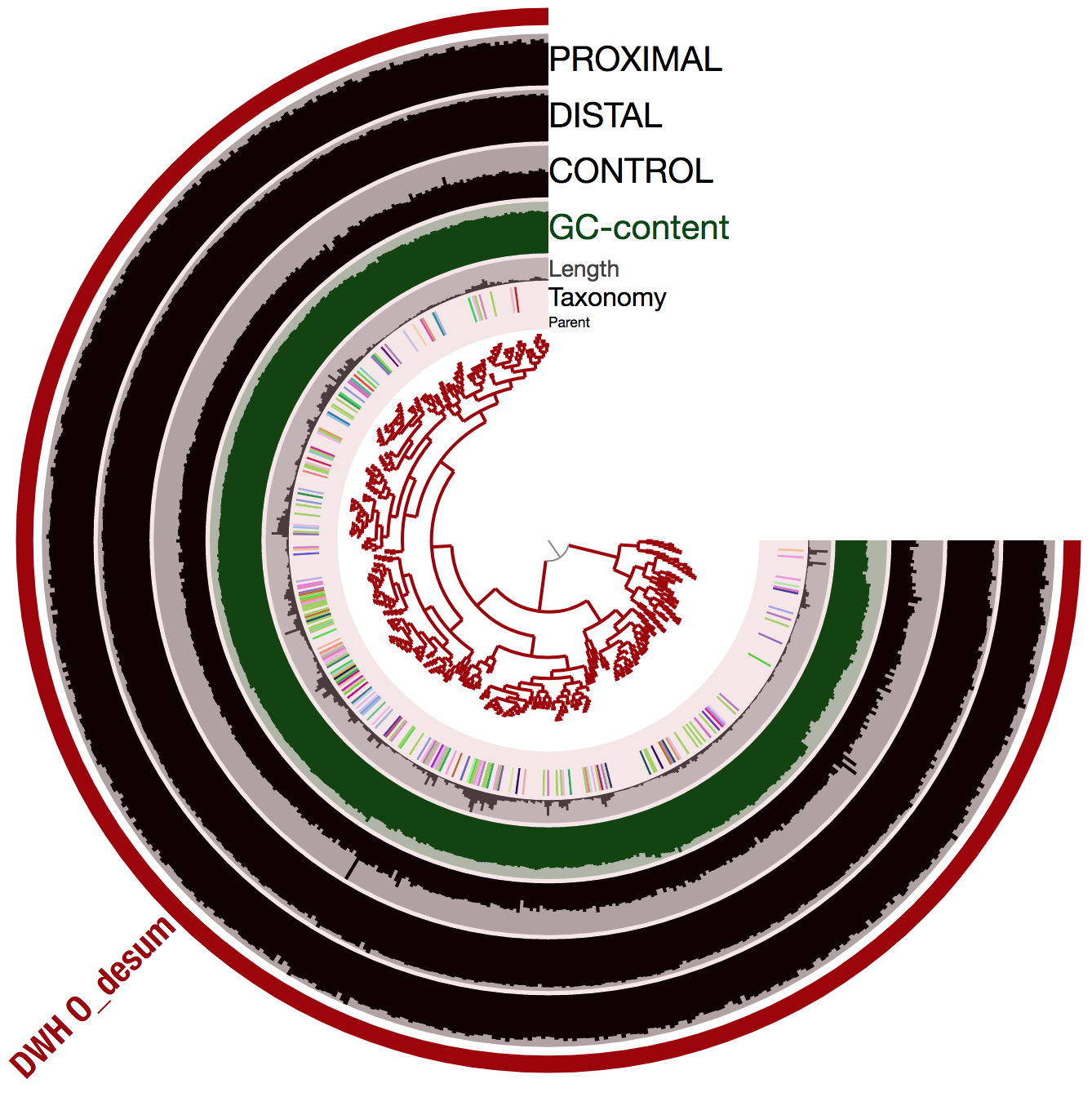 The shape of the inner tree suggests that all scaffolds have a relatively similar tetra nucleotide frequency. This and the coverage trends favor the biological relevance of DWH O. Desum v2. Note that the inconstant taxonomical signal is very common and merely indicates that the genome has not close relative genomes in the reference databases used by Centrifuge.

Here are some statistics about this remarkable population genome:

Here is the Alk gene we used for the BLAST:

Seven years after the disaster, we now have access to the near-complete genome for the bacterial population that once dominated the Deepwater Horizon oil plume. We hope this recovery can contribute to a better characterization of the functional potential, and the contribution of this population to the initial stages of the microbial response to the presence of oil in the environment.

You can access to the history of this discussion here: Ca. Bermanella macondoprimitus is not a strain variant of the oil plume.