A note from the Meren Lab: We are very thankful to Bryan for sharing his expertise on behalf of all anvi’o users who wished to know more about the phages lurking in their metagenomes using VirSorter. Bryan is currently a PhD Candidate in the Sonnenburg Lab, Stanford University School of Medicine.

Metagenome studies are a great way to explore complex communities. Many algorithms and tools have made it possible to reconstruct bacterial, archaeal, and even eukaryotic genome bins for diverse organisms from assembled metagenome sequencing data. However, these algorithms are not well equipped to deal with the most abundant biological entity on earth – bacteriophages. There are several tools designed to predict viral contigs from metagenome assemblies, and prophages from bacterial genomes.

This tutorial will walk you through the steps needed to (1) use VirSorter to predict which contigs in your assembly are phages, and (2) visualize these results in anvi’o using the programs anvi-interactive and anvi-refine. The only thing better than binning with anvi’o is phage-aware binning with anvi’o. Here we go!

A brief introduction to VirSorter

VirSorter was published in Roux et al (2015), along with its source code. The following figure (Figure 1A in the original study) explains the VirSorter pipeline: 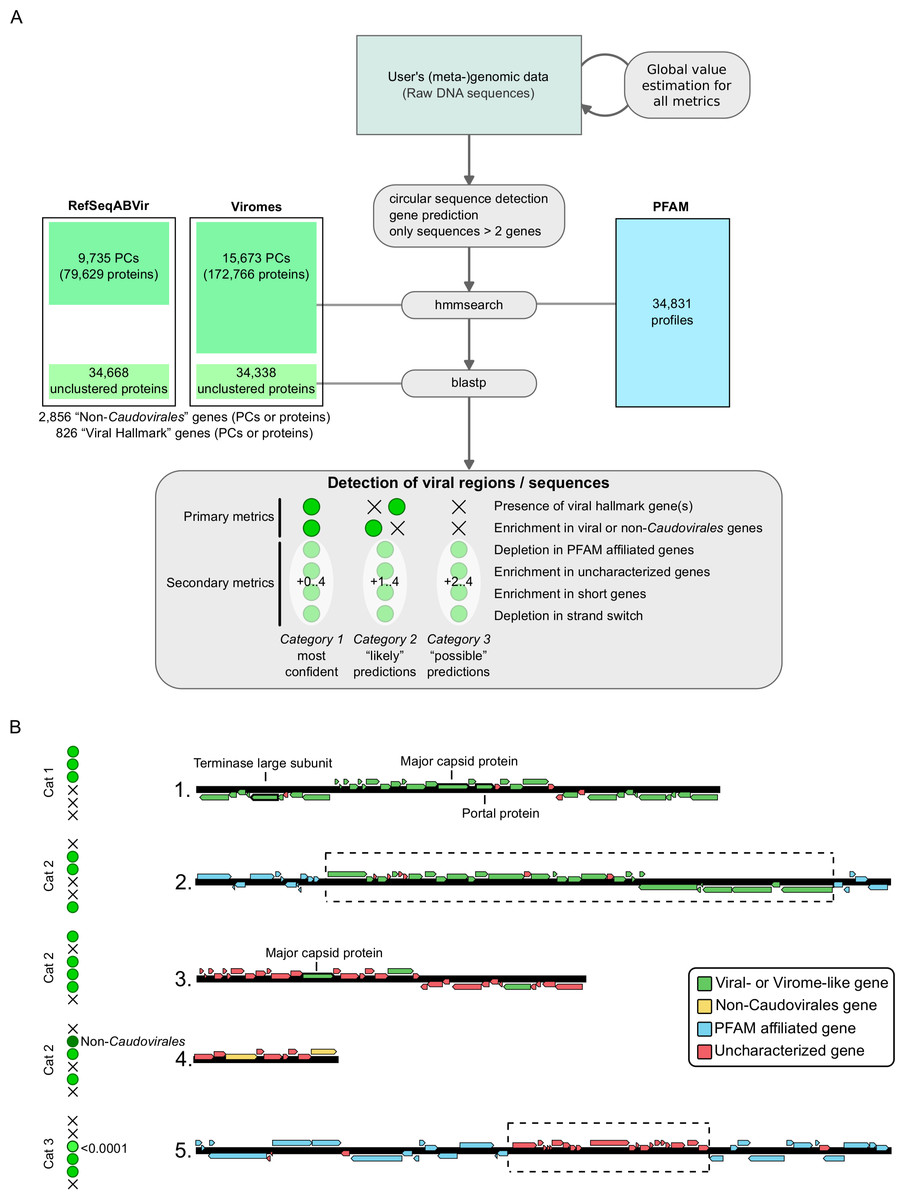 To manually install the VirSorter codebase you can follow the recipe down below. I have only tested these instructions on Linux (Ubuntu and CentOS), but if you have any questions feel free to contact me or leave a comment down below.

Assuming you have conda installed, copy-paste the following commands in your terminal after going into the directory where you wish to install VirSorter:

VirSorter v.1.0.5 is much faster than previous versions because several steps are now parallelized. Unless you opt to use diamond (see VirSorter usage), the results from running VirSorter v1.0.5 should be identical to running v1.0.3.

The commands above will create everything you need to run VirSorter, but VirSorter commands will not be available to you systemwide. To run VirSorter from any directory, you can make symbolic links to VirSorter/wrapper_phage_contigs_sorter_iPlant.pl and VirSorter/Scripts and place them in the bin folder for your “virsorter” conda environment. An example location of this bin folder is ~/miniconda/envs/virsorter/bin. Substitute this path with the path to the bin folder for your newly created “virsorter” environment.

To run VirSorter you will also need to download MetaGeneAnnotator (Noguchi et al, 2006). I like to just put this in the virsorter environment’s bin folder alongside the VirSorter symbolic links.

Now you have a running VirSorter installation, however, you need the data pack to actually run it.

Navigate to a directory where you want the data pack to live, and run the following commands. It doesn’t have to be the same location where you downloaded VirSorter.

To run VirSorter, you will need to point to the path of the data-pack directory using the --data-dir parameter each time you run VirSorter.

The original HMMs made available by Roux et al (2015) on CyVerse were formatted for HMMER version 3.0 (and were very hard to download). The HMMs in the updated data-pack are compatible with HMMER version 3.1b2.

In order to generate this updated datapack, I first downloaded the original data-pack from CyVerse, and then run the following command in it to re-format it:

Then Meren uploaded this datapack here so it can be accessed publicly.

You can always run VirSorter on CyVerse or using Docker. But why not just install it yourself? Once you have the conda environment created, VirSorter downloaded, and the symbolic links made, running VirSorter is as easy as:

It is critical that VirSorter is run on the exact same FASTA file that was used to generate the anvi’o contigs database, map and profile reads, etc. This point can’t be overstated! The FASTA headers should only contain letters, numbers, -, and _. Take a look at some examples here.

VirSorter writes several outputs to a working directory that you specify when run VirSorter. The files we need for importing VirSorter annotations into anvi’o include:

If you have been using anvi’o for your metagenomes, I assume you already have your anvi’o contigs database.

Run the following command to generate one of the essential files we will need to visualize VirSorter split-level annotations in anvi’o:

This will generate an output file called splits_basic_info.txt file, which we will use alongside with the output files generated VirSorter to import everything into anvi’o.

If you want to also generate gene-level annotations for hallmark genes and import those into anvi’o (think capsid proteins, terminases, etc.) then you’ll need to also run this command to export your gene calls from your anvi’o contigs database:

To make sense of all these files, I implemented a program called VirSorterParser.

VirSorter uses MetaGeneAnnotator (Noguchi et al, 2006) and doesn’t accept custom gene calls. Some of the predicted genes may not line up with what anvi’o has predicted on your contigs database. However, if you export your anvi’o gene calls and pass that file to the parser, the parser will attempt to get around this by matching up the start/stop positions of hallmark genes predicted by VirSorter with existing gene calls from your anvi’o contigs database. For each hallmark gene in a contig identified as phage or prophage where this matching is successful, the parser will write that gene and the VirSorter-predicted function to a file that can be imported into your contigs database using anvi-import-functions.

For each VirSorter phage or prophage prediction that spans several splits, all other columns besides “split” are identical across splits. These four metrics are reported on the predicted phage or prophage, not on a given split.

Reported categories in the category column include the following (see Figure 1B original publication, and information therein):

To run the parser you just need the python script virsorter_to_anvio.py. If you want to import hallmarn gene functions into anvi’o, you’ll need two mapping files (one for each VirSorter database). You can download these files into your work directory the following way:

Arguments are described in the help menu:

Briefly, the script takes as input the two output files from VirSorter, VIRSorter_affi-contigs.tab and VIRSorter_global_signal.csv, and the splits_basic_info.txt file from anvi’o. It also asks you which VirSorter database you used when you ran VirSorter. These are required inputs. If you want to test out the parser, samples of each of the required files are provided in the “sample_files” directory of this repository. If you run parser on the the sample files, specify “–db 2” on the command line.

You can control which VirSorter predictions are prepared for importing into anvi’o:

If you want to import hallmark gene functions from predicted phage or prophage contigs into anvi’o, you’ll need to also supply the parser with --anvio-gene-calls all_gene_calls.txt and also a mapping file available in the VirSorterParser repository: --hallmark-functions hallmark_to_functions_files/db2_hallmark_functions.txt.

An example command to run the parser is:

The parser will generate two output files by default. The first is “virsorter_additional_info.txt”, which can be used direcly as an additional data file with anvi’o.

For anvi’o v3 and earlier, you use this file when running anvi-interactive or anvi-refine by using the flag -A virsorter_additional_info.txt.

For anvi’o v4 or later, you can import this file into your profile database as additional data:

The second output file is “virsorter_collection.txt”. This file can be imported into anvi’o as a collection:

This will generate a collection where each phage prediction will become a bin containing all of the splits for that phage.

If you specified files for --anvio-gene-calls and --hallmark-functions, you’ll also get an output file called “virsorter_annotations.txt” containing gene annotations for all hallmark genes inside all contigs predicted as phage or prophage by VirSorter. You can import it into anvi’o like this:

Congratulations, you can now enjoy an even better phage-aware binning experience in anvi’o! If you have any questions or problems, please don’t hesitate to contact me, or submit an issue on my GitHub repository.