This pangenomic workflow is for 2.0.2 and earlier versions of anvi’o. You can learn which version you have on your computer by typing anvi-profile --version in your terminal. The latest workflow and most up-to-date pangenomic is here, and comes with some significant improvements with respect to interactivity.

Cultivation of closely related microorganisms, and the subsequent recovery of their genomes, revealed that not all isolates share the same functional traits for a given population. On the other hand, individual isolates do not fully echo the functional complexity of naturally occurring microbial populations either. Large genomic collections is the only way to get closer to a more realistic picture of the pool of functions in a given clade of bacterial tree.

Overlapping and differing functions among the genomes of closely related organisms led to the introduction of a new concept, “pangenomics” (Tettelin et al., 2005), where genes across genomes are segregated into distinct groups: (1) the core-genome, (2) genes detected in multiple yet not in all genomes, and finally (3) isolate-specific genes that are detected only in a single genome. Pangenomic investigations are now widely used to dissect the functional traits of microorganisms, and to uncover environmentally- and clinically-important clusters of genes or functions.

Although multiple bioinformatics software are available to generate and/or visualize pangenomes, these solutions do not necessary offer flexible work environments, and hence limit the user’s ability to interact with their data.

This post describes the anvi’o workflow for pangenomics using a simple dataset. Using this workflow you can,

You can use anvi’o for pangenomic analysis of your genomes even if you haven’t done any metagenomic work with anvi’o. All you need is an anvi’o installation and a FASTA file for each of your genomes.

Pangenomic workflow uses MCL, which is not a global dependency for anvi’o, hence you may not have it on your system even if you have anvi’o up and running. You can install it using this recipe.

The program anvi-pan-genome is the main entry to the pangenomic workflow. Next chapters will demonstrate how it is used, but first, a brief understanding of what it does.

The only thing you need is to define a name for your genome, and point the contigs_db_path for it (see the later chapters to see how can you get from you FASTA files to here).

The file format to describe internal genomes of interest is slightly more complex, but allows you to do quite a lot. Here is an example file for --internal-genomes:

Any genome bin in any anvi’o collection can be included in the analysis (and you can combine these genome bins with cultivar genomes you have downloaded from elsewhere). Let’s talk about the parameters, and output files before we start with examples.

A note from Meren: I strongly suggest you to do your analysis with the --use-ncbi-blast flag. Yes, DIAMOND is very fast, and it may take 8-9 hours to analyze 20-30 genomes with blastp. But dramatic increases in speed rarely comes without major trade-offs in sensitivity and accuracy, and some of my observations tell me that DIAMOND is not one of those rare instances. This clearly deserves a more elaborate discussion, and maybe I will have a chance to write it later, but for now take this as a friendly reminder.

You need another parameter? Well, of course you do! Let us know, and let’s have a discussion. We love parameters.

Once anvi-pan-genome is done, it will generate an output directory that will be called pan-output by default (and you should change it to a more meaningful one using the --output-dir parameter). This directory will include essential files such as search results and protein clusters, and another special directory with all the necessary files to invoke an anvi’o interactive interface using this command:

Case I: All I have is a bunch of FASTA files

Assume you have three FASTA files for three E. coli strains you want to analyze with anvi-pan-genome (you can download these genomes and play with them if you click those links):

Let’s assume you downloaded each one of them, and now your work directory looks like this:

The first thing is to generate an anvi’o contigs database for each one of them, and run HMMs on them to identify bacterial single-copy core genes. Here is an example for one genome:

If you haven’t created an anvi’o contigs database before, please read this section from the metagenomics tutorial to learn the details of this step.

Doing the same thing above for all genomes in a serial manner would have looked like this, in case you are a work-in-progress BASH scripting guru:

At the end of this, my directory looks like this:

Now all anvi’o contigs databases are ready, it is time to prepare the --external-genomes file:

At the end of this, I can run the anvi-interactive to see my results:

If you click Draw, you will get a pangenomic display. But if you do it after selecting protein_clusters from the Samples > Sample order menu, this time you will get a display of your pangenome along with the organization of your genomes based on protein clusters they share (see the tiny tree on the right side): 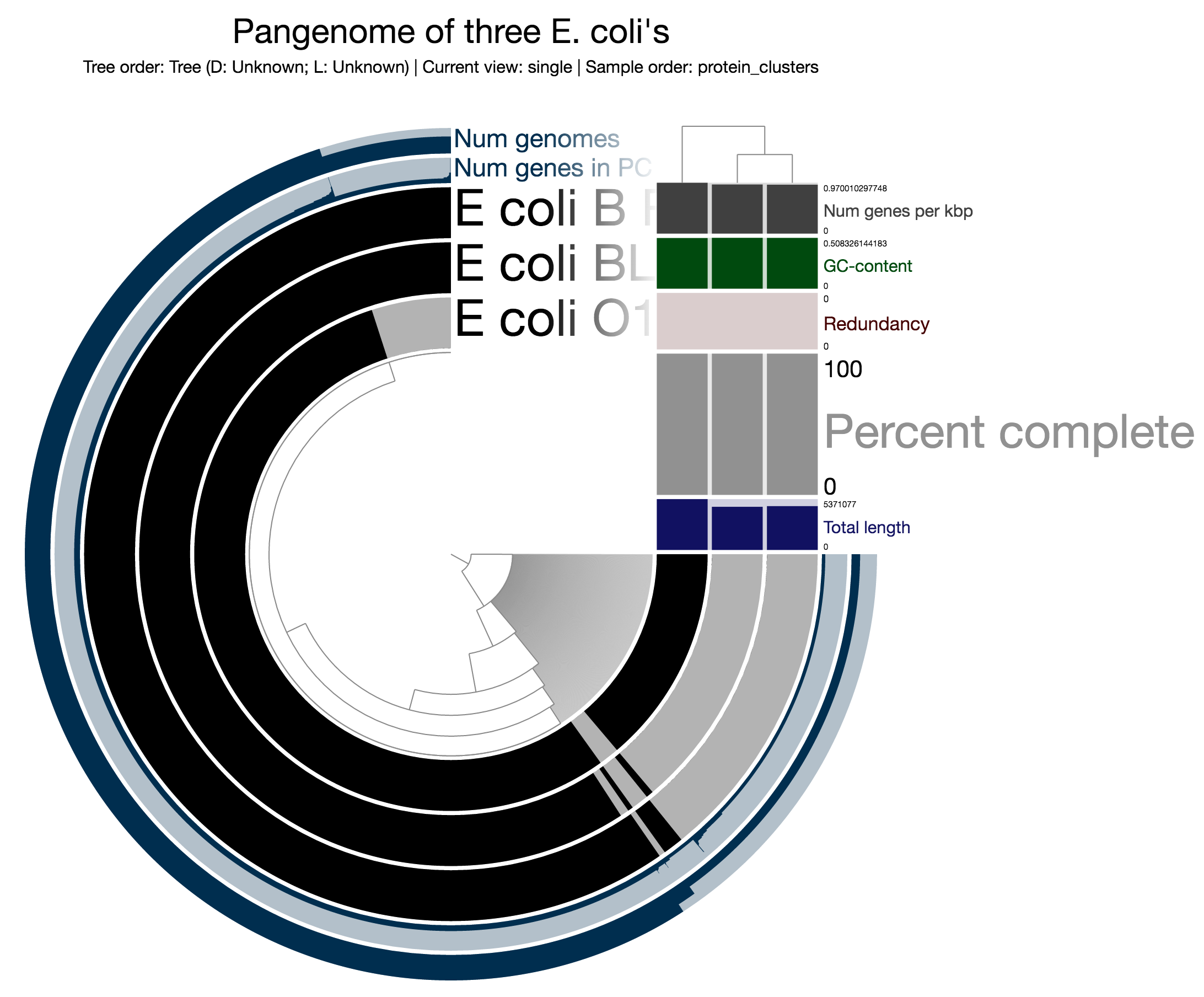 Alright. This doesn’t look quite fancy. But let’s hope your actual genomes will look be much more informative and interesting than three random E. coli’s. To find out ways to enrich your display by including more information about your genomes, continue reading.

Case II: I want to work with my genome bins in anvi’o collections

If you have been doing your metagenomic analyses using anvi’o, it is much more easier to run the pangenomic workflow. All you need to do is to create a --internal-genomes file like this one,

And run anvi-pan-genome using it instead:

The rest is the same!

Case III: Case I + Case II (I want it all, because science)

You are lucky! Just mix your internal and external genomes in the same command line:

We are currently planning to advance pangenomic workflow in anvi’o with improved interactivity and integrated functionality to query data. We will continue to update this post as we progress. For now please bear with us as we explain some not-so-elegant ways to take care of certain things. For instance, we added this section after Alex asked about this (see the comment section below). If you need help getting things done, please just ask!

Sooner or later you will start getting curious about some of the protein clusters, and want to learn more about them.

Taking a quick look into a protein cluster

One of the key output files to investigate the protein clusters you see in the pangenomic display is the file protein-clusters.txt, which looks like this:

Making selections on the display

Alternatively, you may want to focus on groups of protein clusters. Using the anvi’o interactive interface you can bin your protein clusters, and store them as collections to process them further.

Just as an example let’s assume you are interested in gene calls that are unique to the E. coli genome O111 in our mock analysis on this page. You can select all protein clusters the following way: 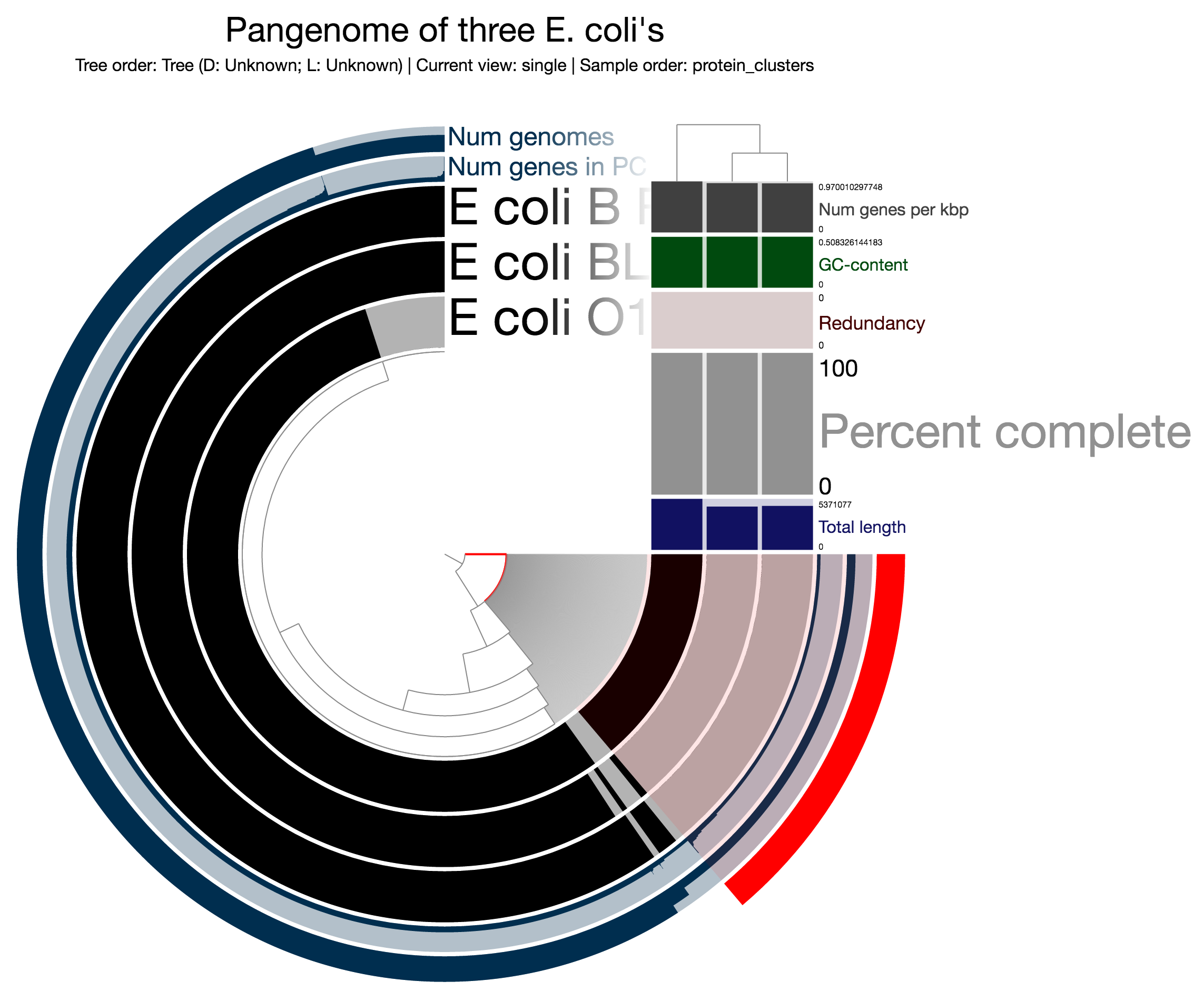 And then you can store them as a collection. Let’s assume you clicked Bins > Store bin collection, and typed in PCs in the input box as a collection name, and finally clicked Store to create a collection (clearly you can choose any name as far as you promise you will later remember it later). Now you can go back to the terminal, and export bins in the PCs collection (we have only one bin this time, but of course there is no limit how many bins you select):

OK. Each of these three files that are just created in your work directory contains gene caller ids for protein clusters matching the red selection for each genome. Expectedly, there are 0 calls for E_coli_BL21 and E_coli_B_REL606, since the protein clusters in that particular selection are unique to E_coli_O111.

Resulting FASTA file will have sequences that are unique to E_coli_O111 genome:

It is also possible to show a particular group of protein clusters in the pangenomic display. If you have a list of protein clusters, you can import them into the profile database as a collection. To demonstrate it using the mock example, let’s assume what you want to do is to identify protein clusters that contain at least one gene, translated amino acid sequence of which has more than 500 residues. This awk one-liner will give me a TAB-delimited file that can be used to import into the profile database using anvi-import-collection:

Although in this case there is only one bin, LONG_PCs, of course you may have as many as you want for a real-world application. If you import this file into the profile database as a collection the following way,

This is what you should see after running the interactive interface again, and loading the collection LONG_PCs: 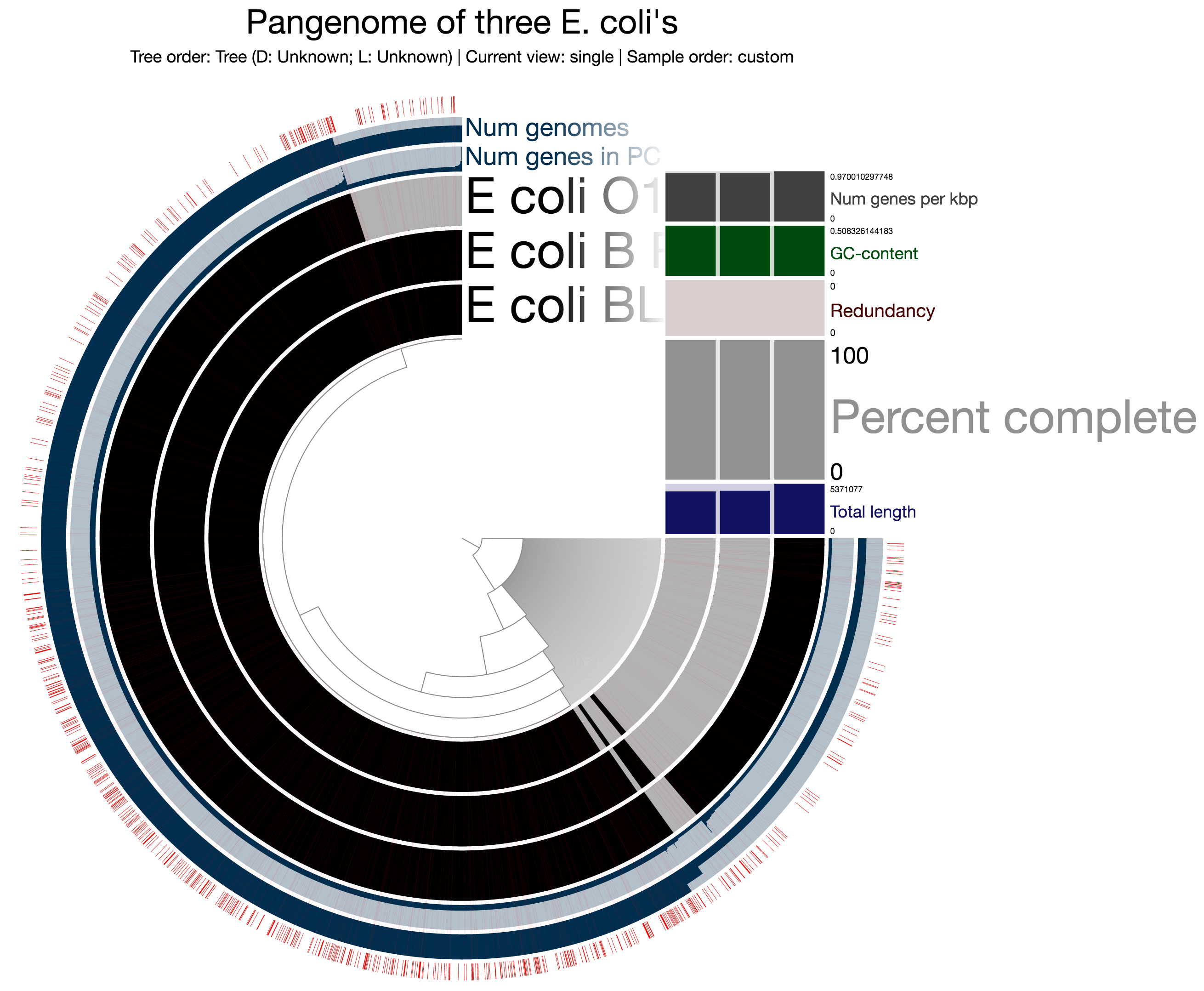 Interesting! The proportion of the longer genes vs. shorter ones seem to be much higher for the core, compared to the what is specific to E_coli_O111 (Meren: when I was coming up with this example I didn’t expect to see this, now I wonder if it is a methodological artifact or a biologically relevant or expected outcome).

Of course adding new collections to the profile database is not the only way to highlight PCs of interest on the display. You can add as many columns as you like to the file additional_view_data.txt.

The output directory of a pangenomic analysis will contain two files, additional_view_data.txt and anvio_samples_info.txt, both of which will contain some default information about genomes and PCs. You can certainly add more contextual information about your genomes to increase the number of layers by adding more columns to the additional_view_data.txt, and re-generating the samples.db after adding more columns to the anvio_samples_info.txt file.

For instance, here is a slightly richer analysis of 30 genomes: 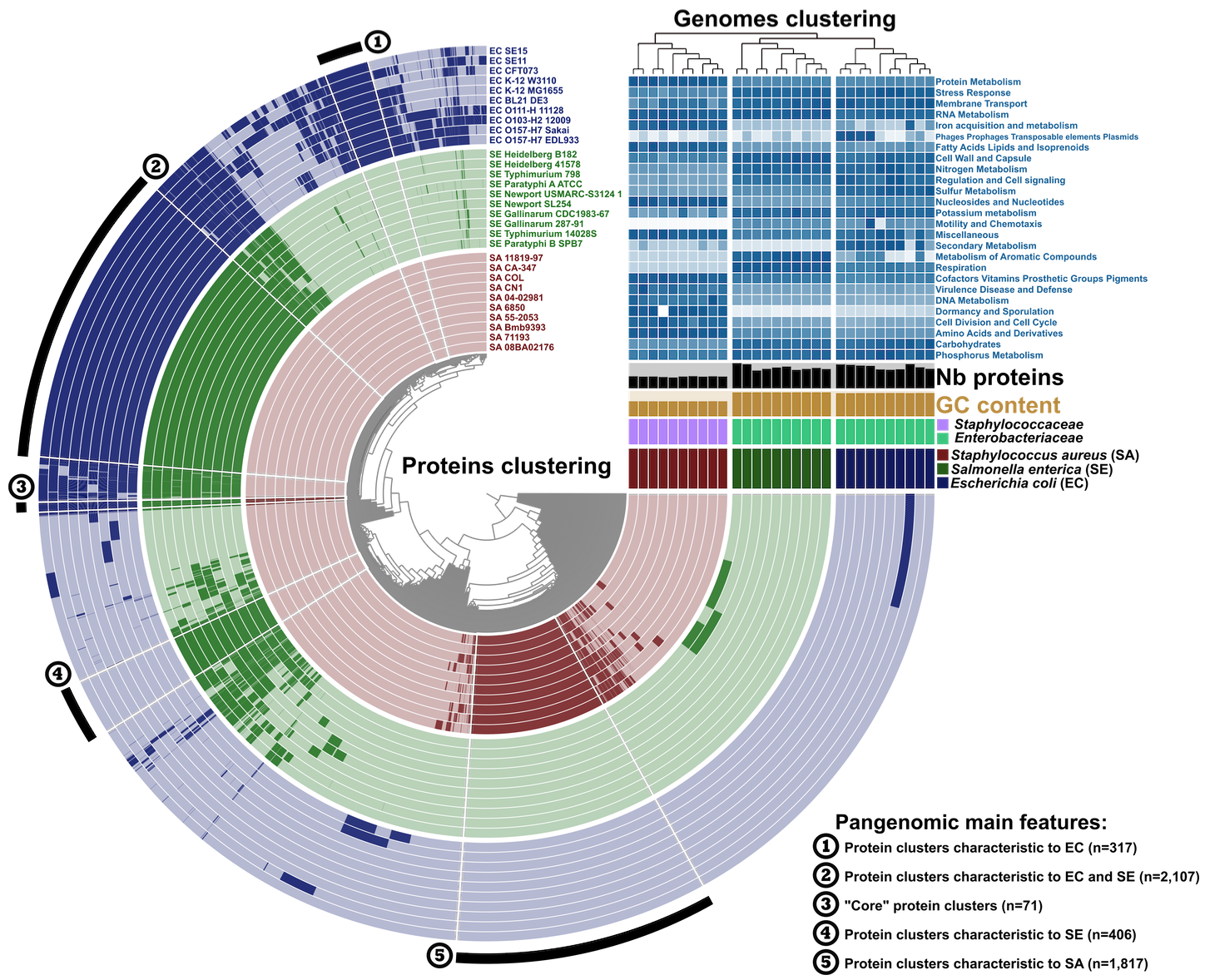 The rest is up to your inner artist.