Here you can find a list of past and future anvi’o workshops and events.

We are happy to organize (or participate to) metagenomics workshops given there is interest and we are able. The purpose of this paragraph is to communicate our needs from those who are interested in inviting us to offer a workshop. We are more than happy to consider invitations if our hosts are willing meet the following general requests. These expectations are not written on stone and are open to discussion, however, they help set the stage properly to make sure our mindset is clearly communicated. We generally request institutions to (1) be prepared to host us (usually Meren and Ozcan) for two full days, (2) make the workshop publicly accessible (i.e., keeping 30-40% of the seats to those who may want to attend from outside institutions), (3) offer free lunch to all attendees (since outsiders often struggle to find appropriate places to eat within the time constraints of the dense workshop schedule), and (4) provide coffee and healthy snacks for our breaks. We do not request (or accept even when we are offered) any monetary compensations for our time at workshops we offer, but we except our basic travel expenses to be covered (i.e., economy class flights and basic accommodation at somewhere near the event location). Finally, we request our hosts to consider not charging the participants any attendance fee to maximize the accessibility of these events to underrepresented groups. Thank you very much :)

Our first in-person workshop since the start of the COVID-19 pandemic! The Microbiome Center at the University of Chicago hosted this workshop, which included a 2-hour session on metagenomics featuring anvi’o. It was free to attend for people both within and outside the university, and was also broadcast over Zoom. Check out the workshop materials here.

The Doctoral Programme in Microbiology and Biotechnology at the University of Helsinki is hosting a 2-day anvi’o workshop. They kindly offered 12 seats for those who wish to attend to this free workshop from other institutions. The program also generously promised free lunch and coffee for all participants to make them forget about the cold outside.

After years of teaching in many places, I can confidently say that #EBAME is one of the best ‘omics workshops I’ve ever attended. Seriously. The workshop organization, which is led by Lois Maignien, has consistently delivered its top game with infrastructure and socials, and Brest gave us more scenery than we could handle. 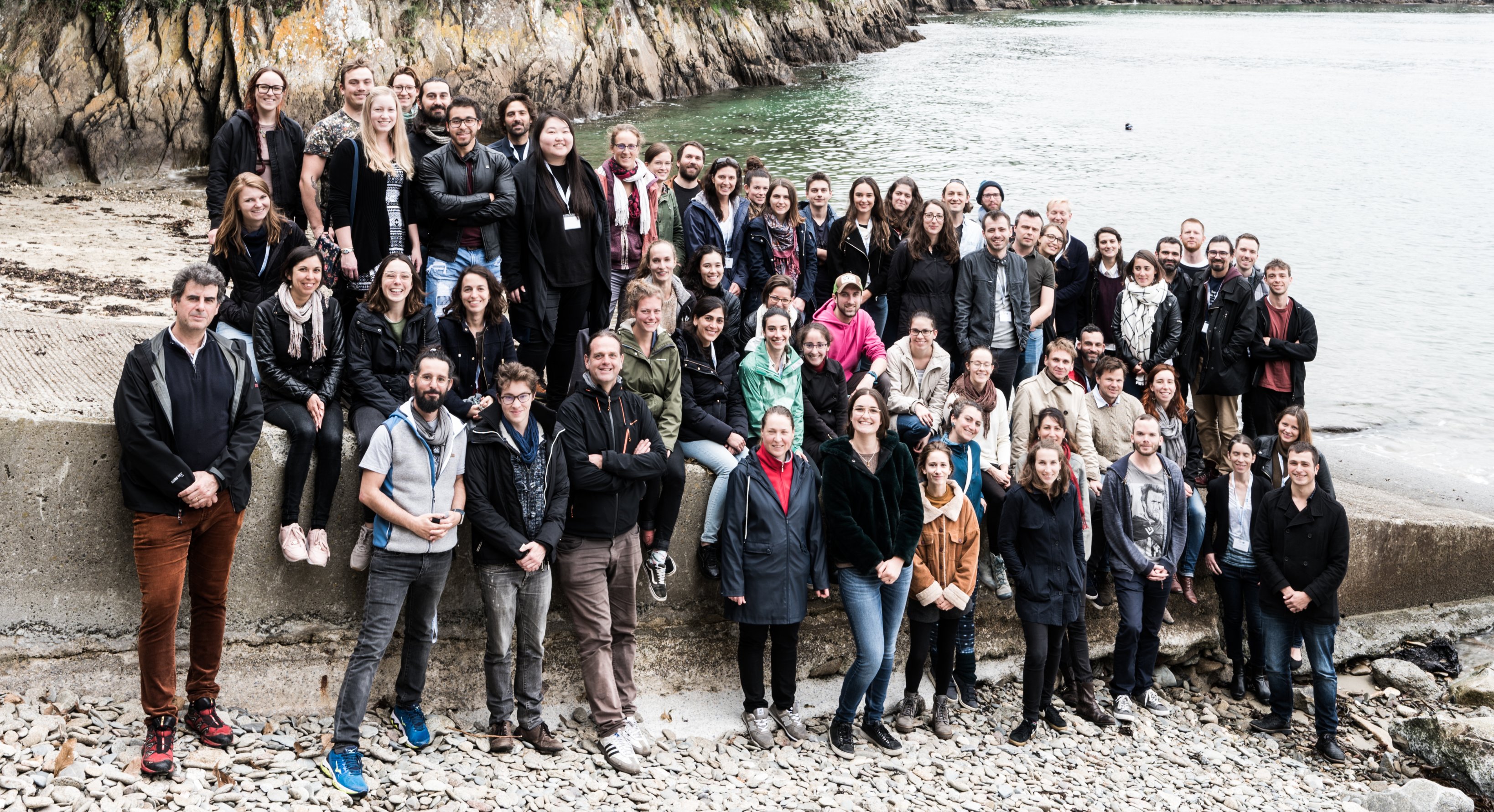 Scenes from the 5ᵗʰ #EBAME, one of the most comprehensive and cutting-edge microbial 'omics workshops organized by @LoiMai, @JulieReve et al, hosted by @IUEM_Brest & @UBO_UnivBrest, and taught by many scientists at beautiful Brest🇫🇷

Keep this one in mind for the next year. pic.twitter.com/zsPUTmksja 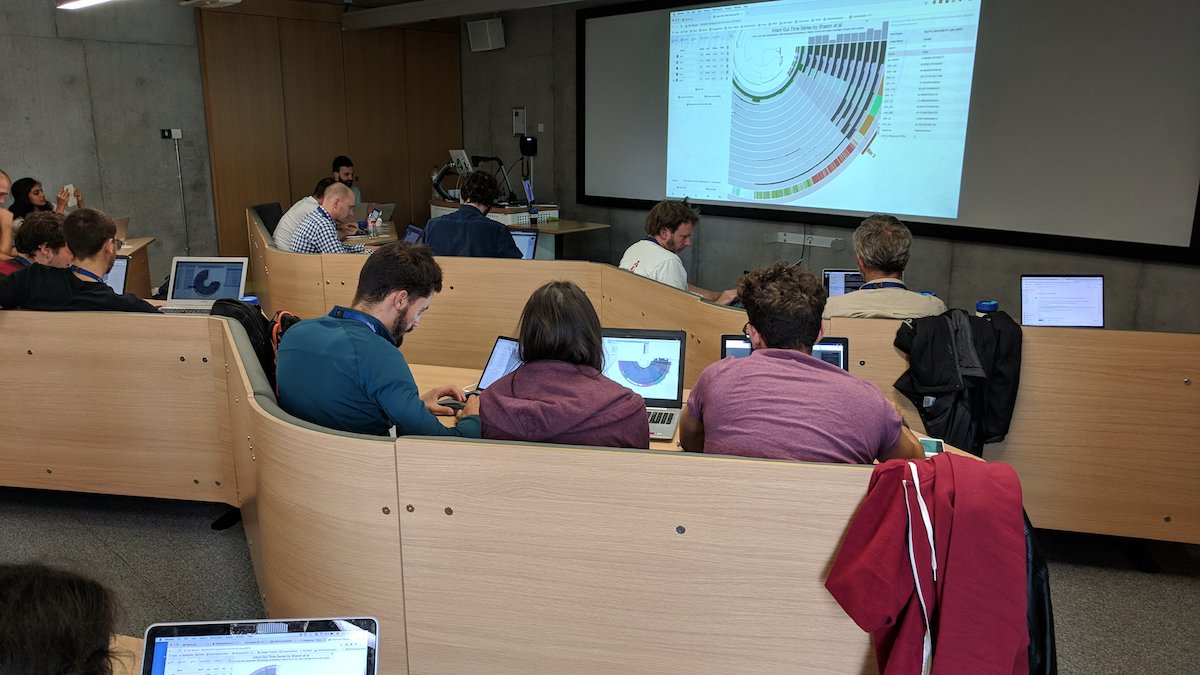 Focus: The main focus of this hands-on workshop will be genome-resolved metagenomics, and the opportunities and pitfalls it brings into microbiology. We will cover reconstructing microbial genomes from metagenomes, screening the quality of metagenome-assembled genomes (MAGs), studying their environmental heterogeneity through single-nucleotide variants (SNVs), de-convoluting sub-population genomes using SNV patterns, pangenomics, meta-pangenomics, phylogenomics, and other analyses and visualization strategies to implement comprehensive workflows in order to inverstigate fundamental questions of microbiology.

enjoying @merenbey giving his intro to the #anvio interactive interface at the UC Irvine workshop pic.twitter.com/Q9ujTcoa5x 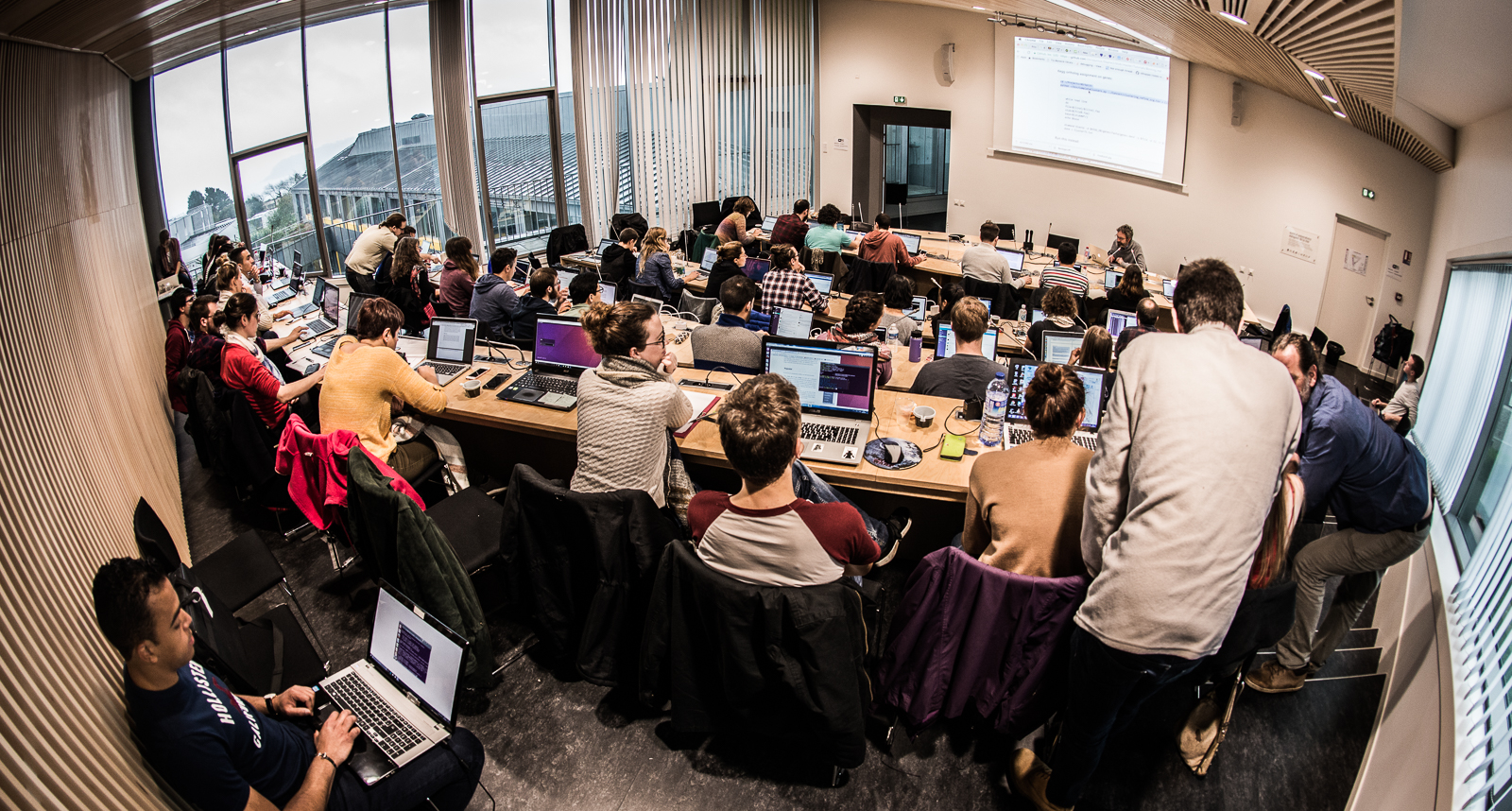 EBAME3 group photo (which even includes Tom Delmont, who was late to the shoot, but Evan Kiefl kindly recovered his running pixels after going through the photo carefully). 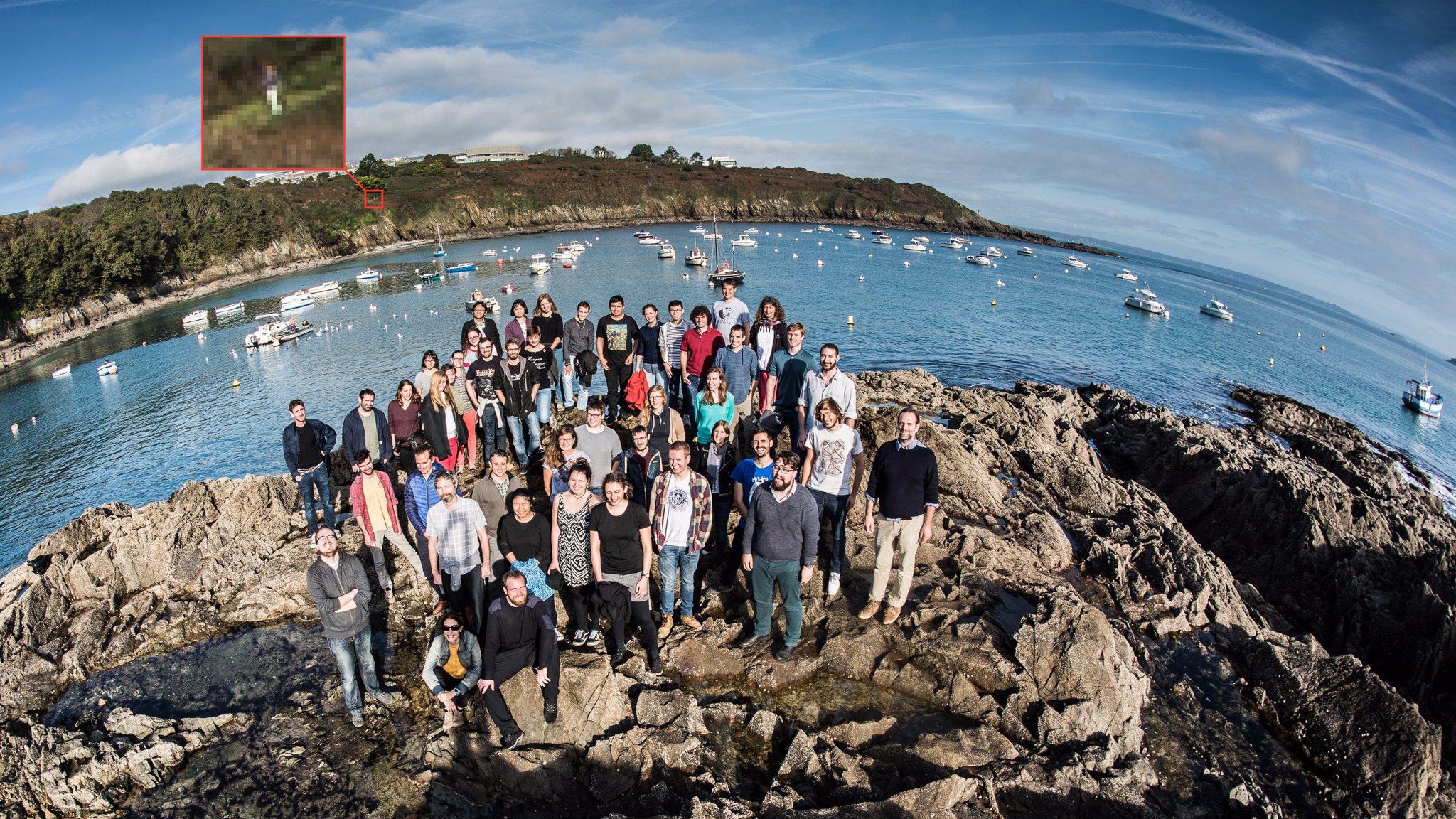 Aftermath: Although how well we did to go through the workshop topics is open to discussion, we probably were most successful at making the most out of the cozy space that was available to us: 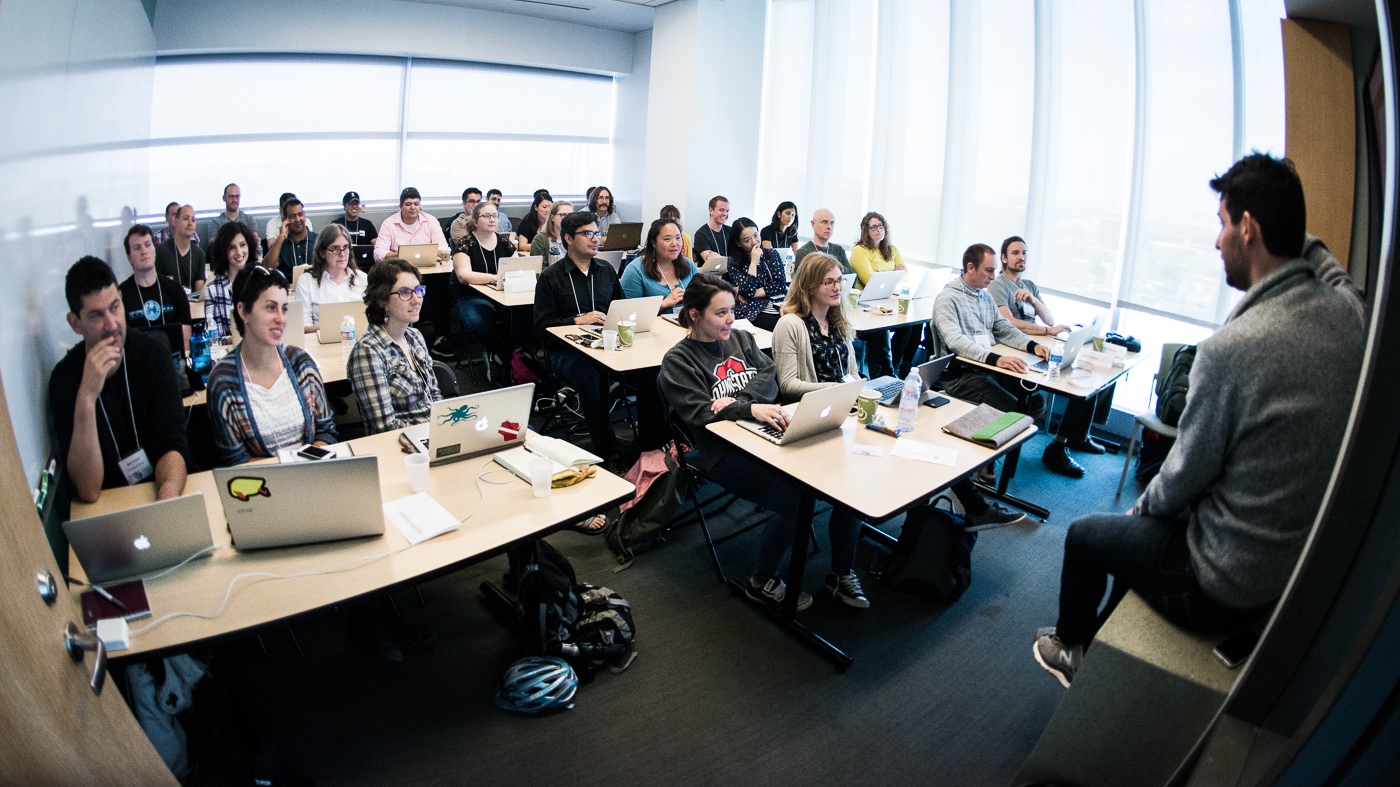 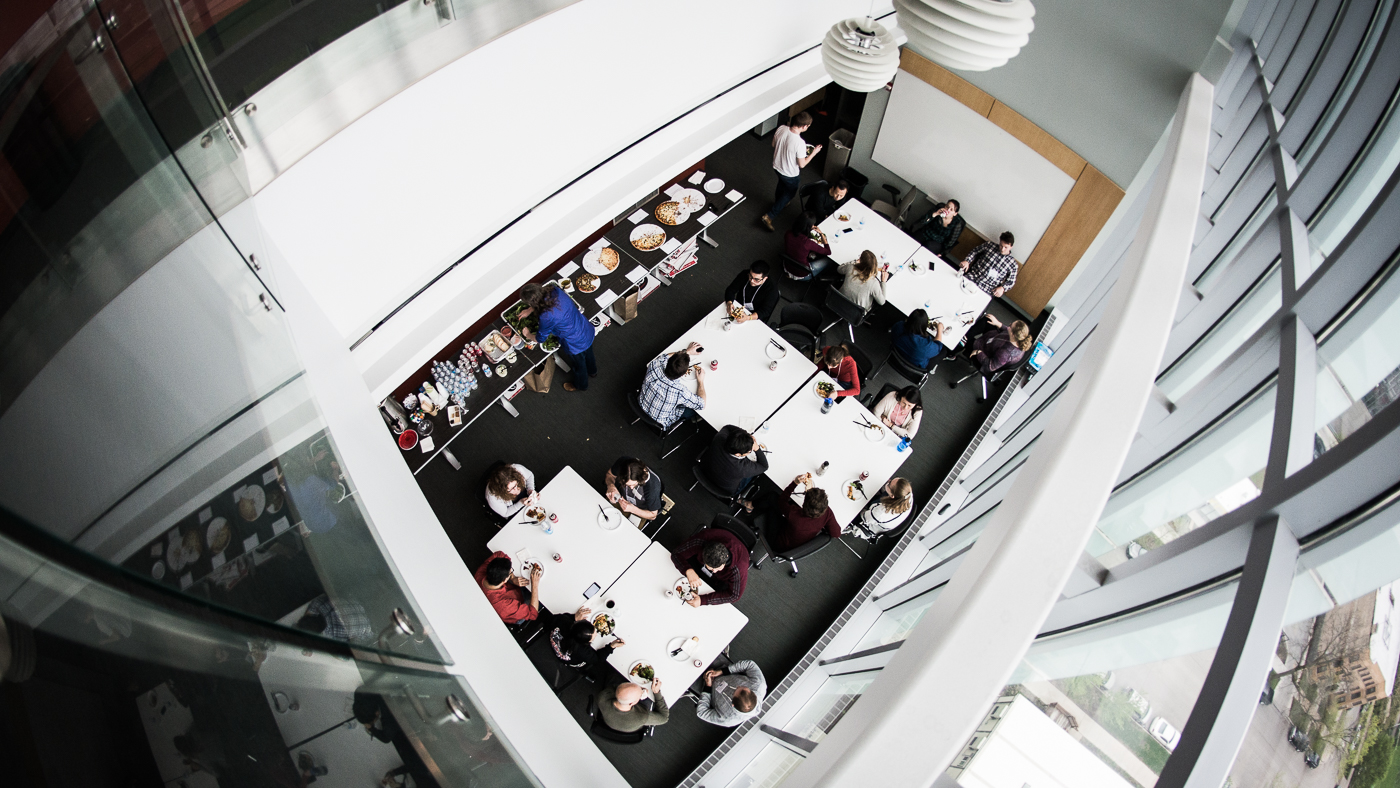 Which inspired this haiku from Jessica Mark Welch:

There are some very exciting talks during this event. Just so you know.

“The First Traditional Anvi’o Colloquium in Montréal” (hehe) has been quite fun. Myself, Tom Delmont and the 20-some participants of our tiny workshop were pleasantly surprised by the effort Nicolas Tromas put into arranging this event. I thank him and Jesse Shapiro very much for making this a possibility.

We talked a lot about challenges and opportunities emerge from metagenomics, and about using anvi’o as a workbench to explore complex metagenomic data. I thank all participants for their patience, great questions, and feedback!

During the workshop I lost a historical battle, and finally agreed to make the necessary changes for anvi-gen-variability-profile to also report dN/dS for each variable nucleotide position by default. I made very good arguments, but they didn’t work.

I also thank Adrien for this sketch, although it makes me look much cooler than I do:

Our workshop was right after ISME 2016 conference, during which we had many missed interactions with friends and colleagues, which made it totally worth carrying an anvi’o poster all they way to Montreal:

For people who are interested in a higher resolution, a PNG file for the poster is also here: eren-isme-poster-72dpi.png.

STAMPS was very exciting this year. This was the first time Tom and I presented anvi’o to a large crowd, and heard back some very encouraging feedbacks:

Thrilled to learn how flexible Anvi'o is for meta/pan/gene/genome analysis, data viz. Thanks for the detailed posts @merenbey; I'm a convert

Blown away by Anvio for metagenomics data analysis and visualization. Thanks @merenbey!! #STAMPS16 #microbenet pic.twitter.com/XkDqjCcHnR

I guess we will continue working on anvi’o after these!

Here is a group photo (which is pretty much my job during every STAMPS course since 2011): 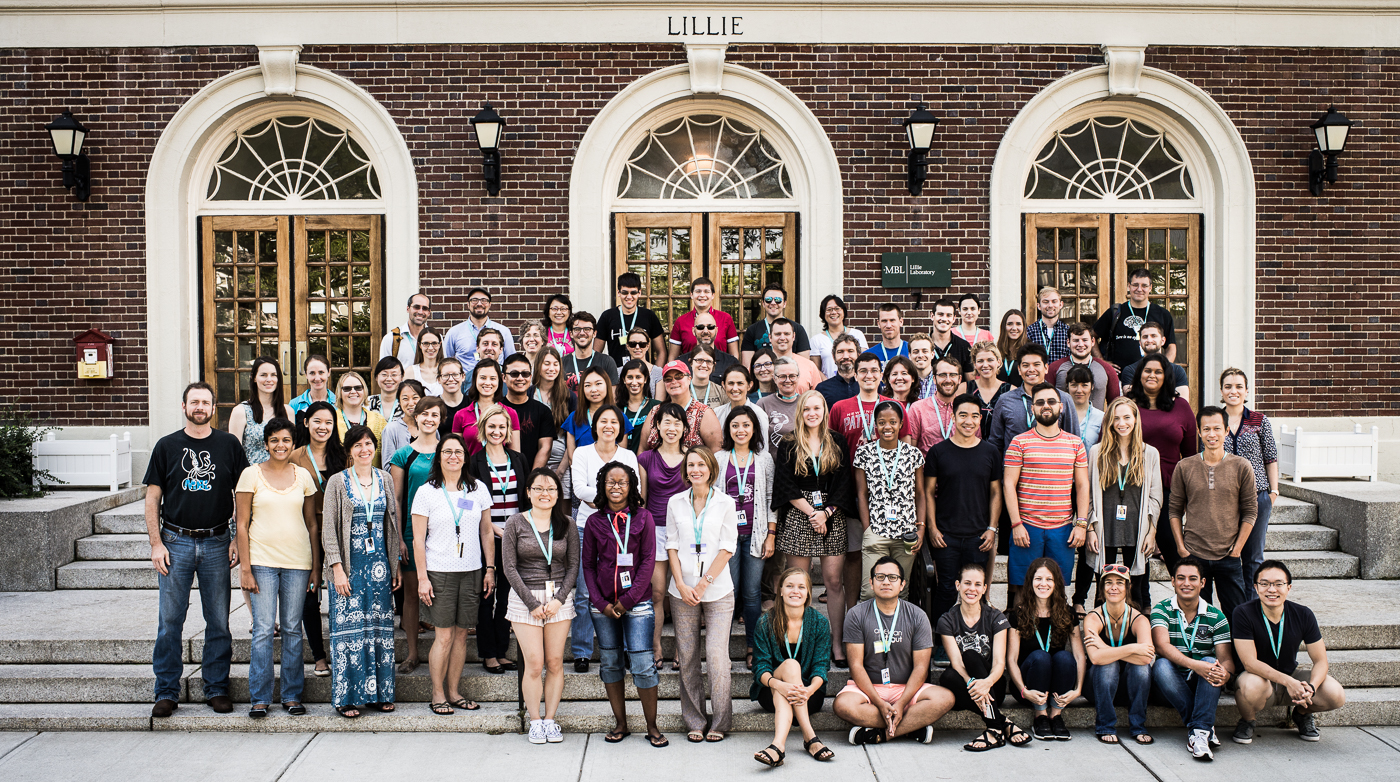 ECOGEO covered multiple topics. The first day there was a UNIX tutorial by Ken, and lots of marker gene stuff from multiple people. The second day there were four modules: assembly, binning, annotation, and phylogenetics. I -for the first time- used anvi’o to compare binning tools.

Here is Ken teaching UNIX to the class the first day: