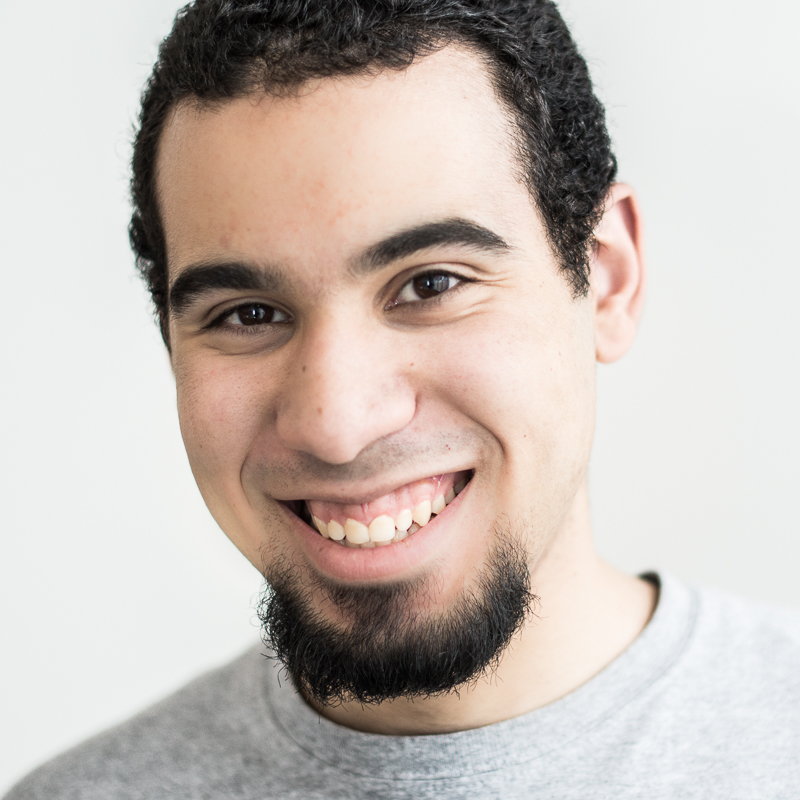 A note from the Meren Lab: We are very thankful to Mahmoud for not only implementing this beautiful feature in anvi’o, but also taking the time to explain it in such great clarity. Mahmoud is currently a a second year Computer Science major pre-med student at the University of Chicago.

As I’m sure you know, anvi’o is a powerful software that among other things can be used for pangenomics. By inferring similarities between amino acid sequences, anvi’o’s pangenomic workflow identifies gene clusters across closely related mirobial genomes, and allows one to investigate how and where these genomes differ.

Using anvi’o you can ‘inspect’ the alignments within a gene cluste, too. But how about a pangenomic software doing more than simply blurting out amino acid residue sequences? Wouldn’t it be better for the software to tell us when a specific residue is conserved or not conserved across different genomes? And how about the bigger picture –is the protein structure expected to be conserved across different genomes for a given gene even if an amino acid residue is not identical?

To address these needs, I implemented a new feature into anvi’o that will be available with v4. Using this new feature anvi’o will now explicitly label amino acid residues that are conserved across different genomes in a given gene cluster. This is an important insight to have rapidly, as knowing the conservation of amino acid residues and protein structures is equivalent to understanding the extent of the genetic relationship between different genomes.

A little bit of basic biochemistry

What determines the structure of a protein? A protein has four levels of structure:

As we can see, all four levels of a protein’s structure are determined by the properties that the amino acid residues exhibit in that protein.

And what makes the amino acids so special to the point that each one can have a different effect on a protein? The standard genetic code includes 20 amino acids. All of them have a positively charged amino group and a negatively charged carboxyl group. But every amino acid has an extra sequence of atoms that makes it unique from all other amino acids - we call this the R group or the side chain of the amino acid. The R groups differ vastly in properties - some are short and nonpolar, some are long and polar, others have an additional charge to them. It’s these chains that make amino acids so unique in their properties.

So if there was a way to identify conservancy properly, we could make better sense of heterogeneity across amino acid sequences within a gene cluster.

The algorithm for determining conservation is simple. We align all of the amino acid residues of a single polypeptide chain (which is taken care of per gene cluster by anvi’o if the user did not speficially opted out). We then cross-check a given amino acid residue at a given site with all other amino acid residuies across genes from other genomrs at the same site. If we find that the percentage of gene clusters that are conserved with respect to protein structure is above a certain threshold, we color code it. Otherwise, we give it the default color of black (there will be some examples soon to show how this looks on the interface).

Below is a table of all of the amino acid conservation cutoffs and predicted conserved groups that were used in this algorithm, which I adapted from Clustal X, and edited slightly:

What’s the biochemical significance of each conservation group? And what about the colors? Let’s walk through it:

The percentage cutoffs are all estimates as to how much an amino acid contributes to the structure of the protein. In any given residue or any given protein, these values can shift depending on the secondary structure and the folding patterns at that exact location.

Once you have your pangenome ready, you will display it with anvi-display-pan command (more instructions regarding the pangenomic workflow is here).

Here I will display the Prochlorococcus pangenome the following way:

Which gives me this disyplay: 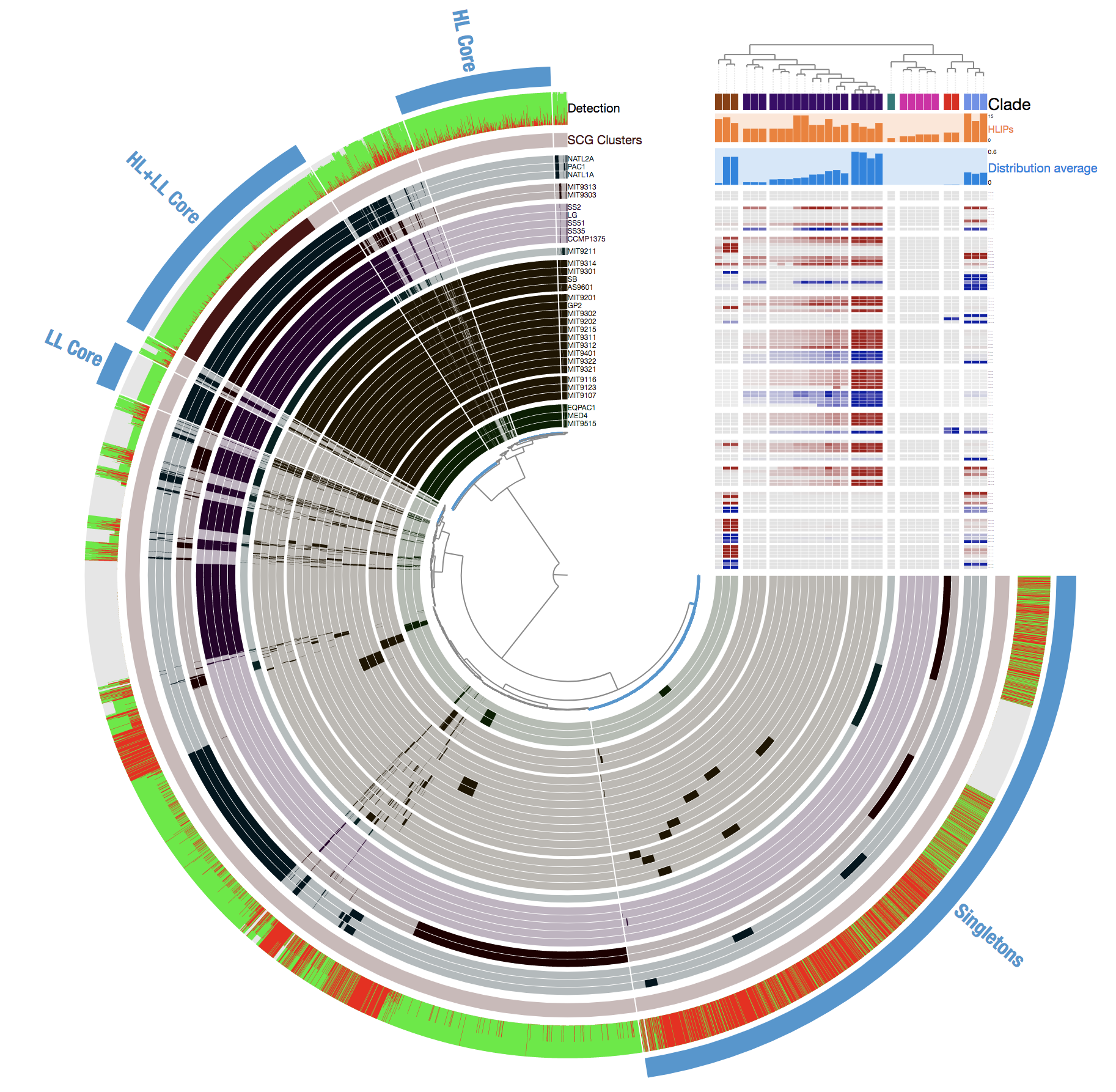 Please take a look at the published study, or read the avni’o pangenomics tutorial if you need to orient yourself to this display.

Those of you who are already familiar with anvi’o interactive displays, know that we can right-click any of the gene clusters in this display, and click on “inspect gene clusters” to see the amino acid sequence alignments. Here, an example with gene cluster 1039: 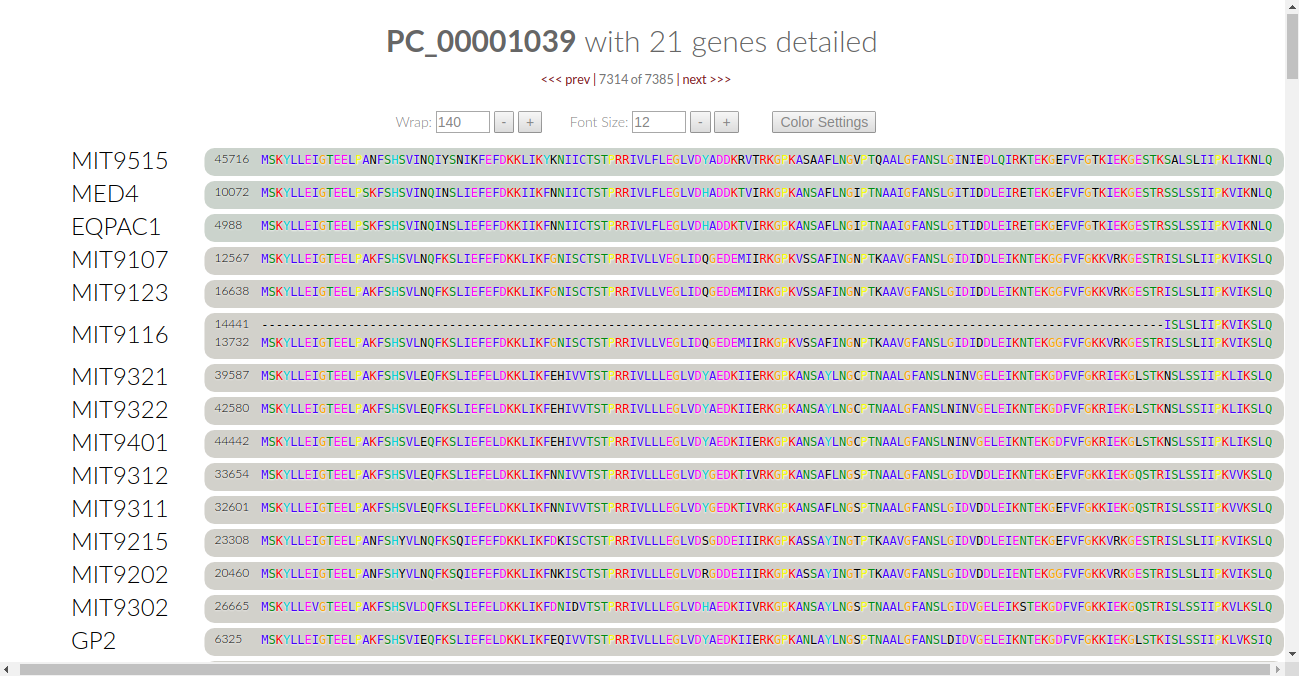 If you have used the anvi’o pangenomic workflow before v4, you will notice two differences. First, the amino acids are now printed in varying colors. Second, next to the controls for wrap and font size is now a button labelled “color settings”.

Click on it, and something else will pop up underneath these controls: 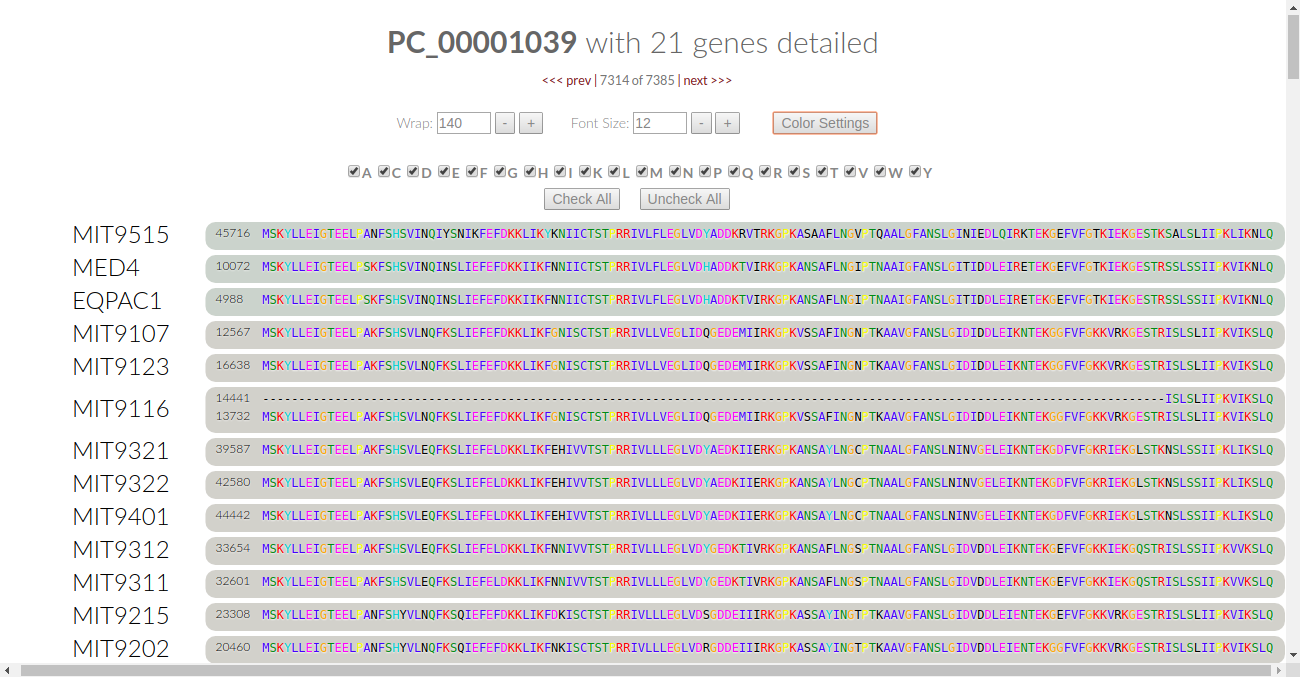 Are the colors too overwhelming to begin with? Let’s turn them all off and pause the algorithm. Click on the “uncheck all” button: 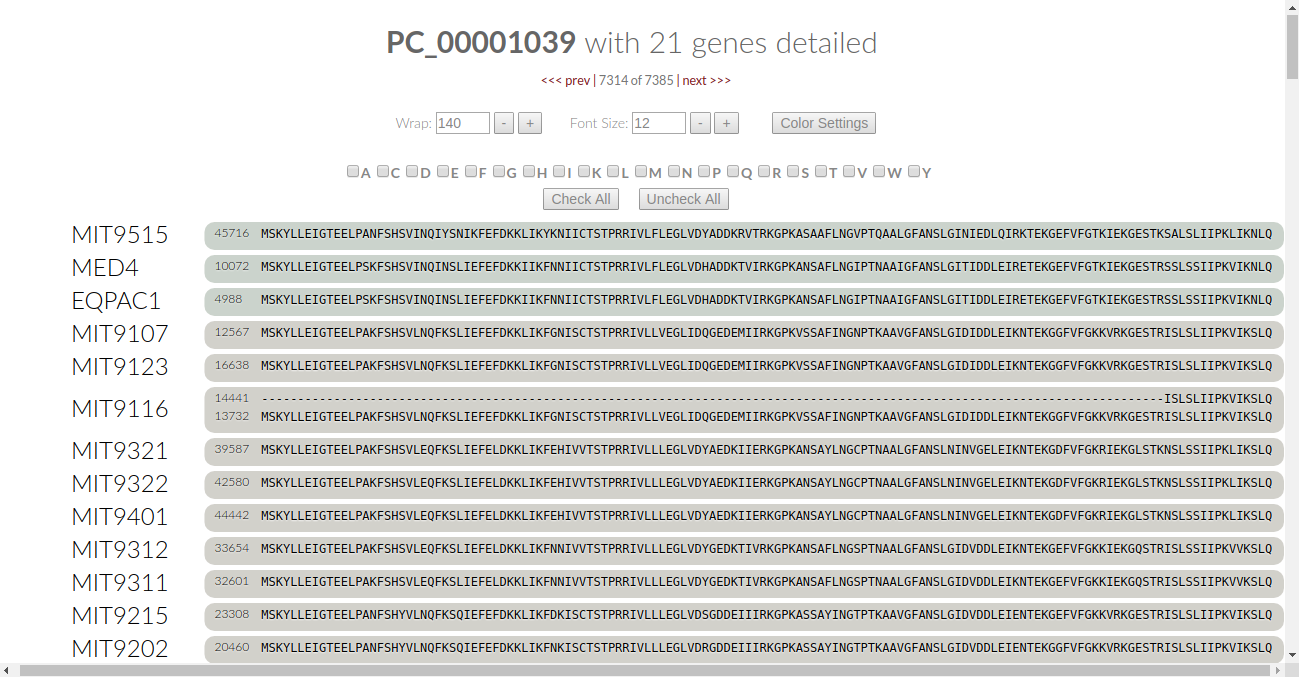 This turns the font color for all of the amino acids to black. We can be selective as to what amino acids we want the algorithm to check. Let’s say we want to check for the conservation of Cysteine. Click on the C checkbox and the algorithm automatically kicks in: 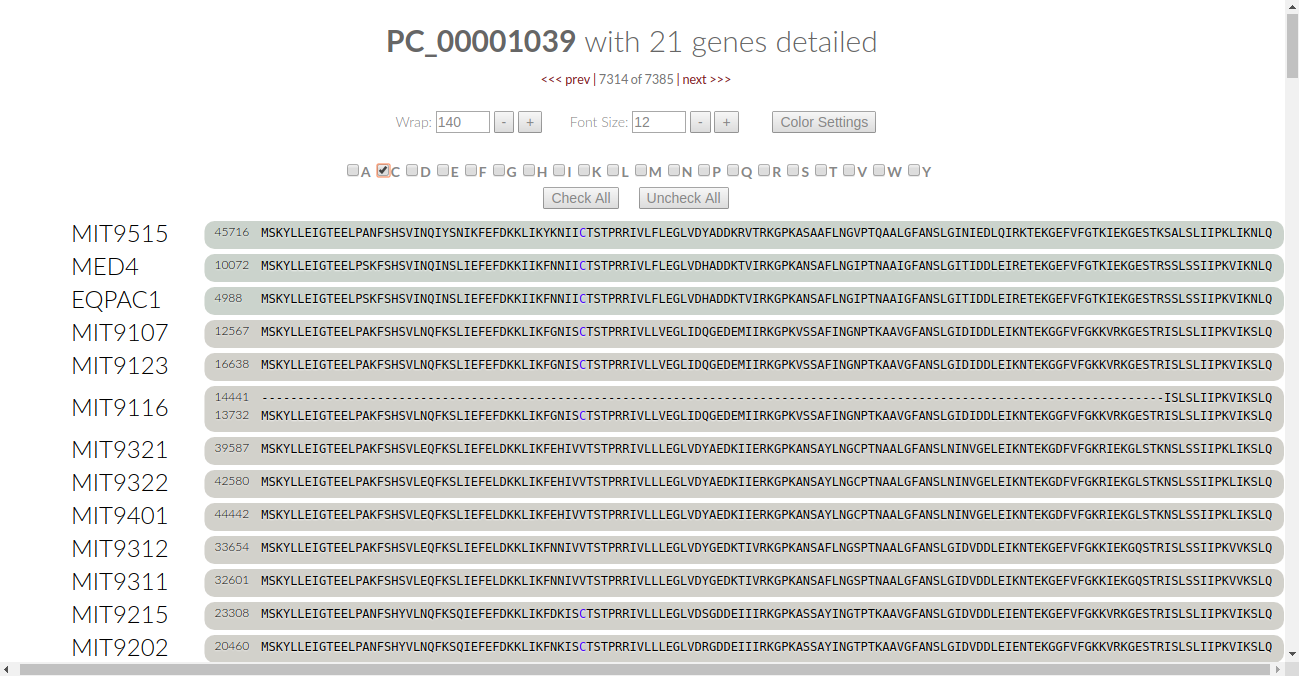 Let’s look at it - in our current viewing frame of the gene cluster, there is one place where cysteine is conserved. It’s colored in blue, and we notice that some of the genomes have a valine (V) in that residue. Is valine conserved here? Leaving “C” as it is, let’s click on “V” to find out: 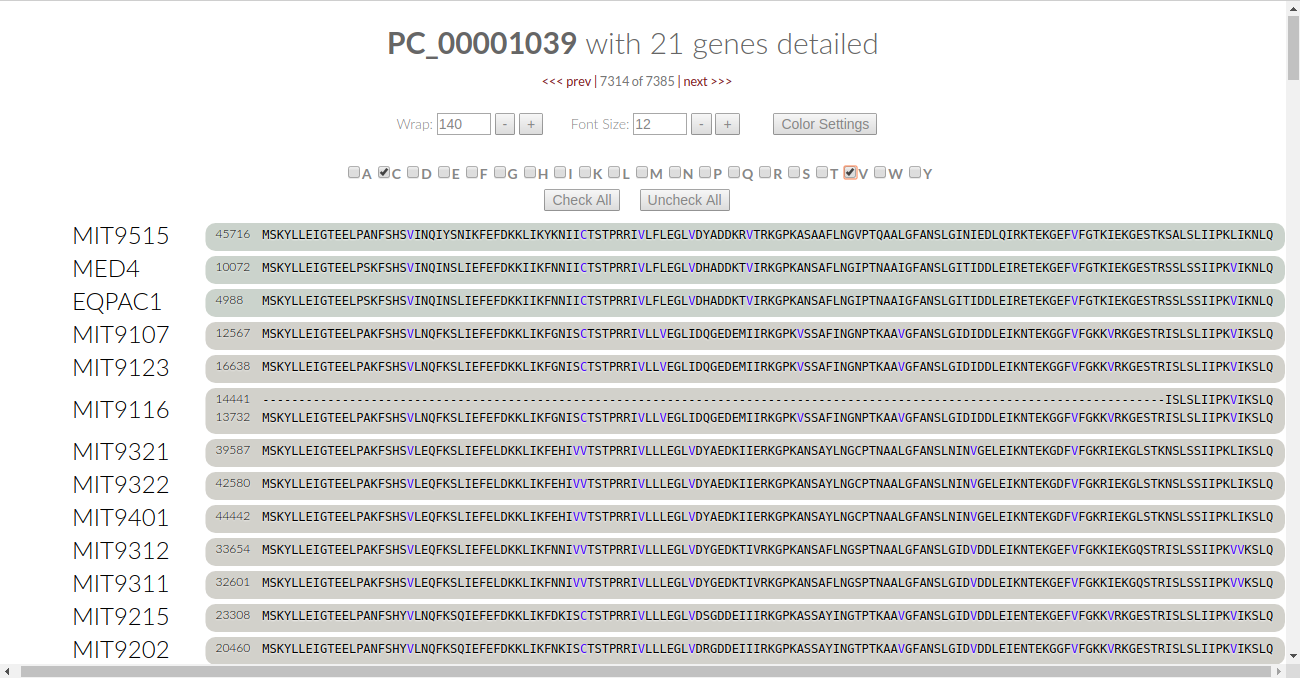 Now we see that the valines are colored in blue, meaning that they are conserved in this residue. Therefore, we can say that all of the proteins in this gene cluster are conserved at this one residue through nonpolar effects.

Leaving everything as it is, scrolling down a little bit through this gene cluster will give us this: 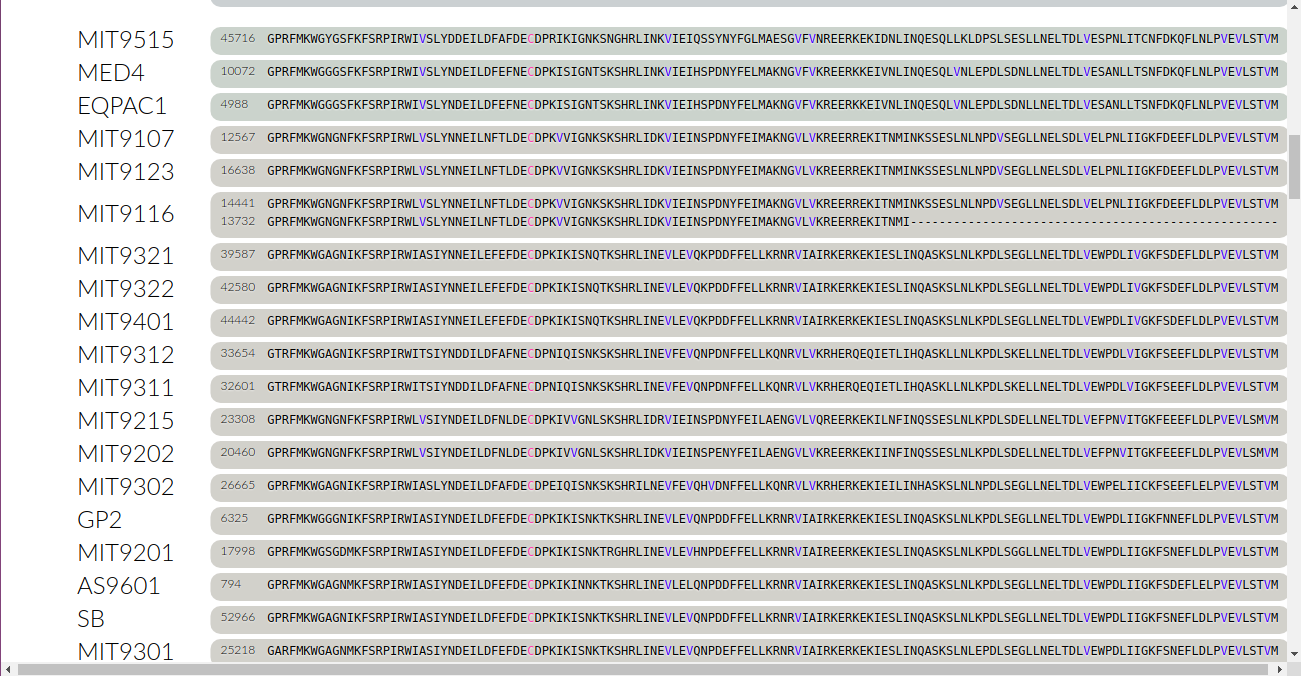 Here, cysteine is colored in pink instead of blue. We can then conclude that all of these genomes are conserved at this residue because of the special sulfide bonding effects of cysteine.

Play around with different amino acids and check for conservation in this gene cluster. If you want to check all of them, click on “check all” and the algorithm will automatically investigate conservancy for all of the amino acids across all genes.

Let’s look at gene cluster 2786 as another example.

Click on “Color Settings” and then “uncheck all” to bypass the algorithm (our screenshot is scrolled down slightly to capture all of the genomes in this gene cluster): 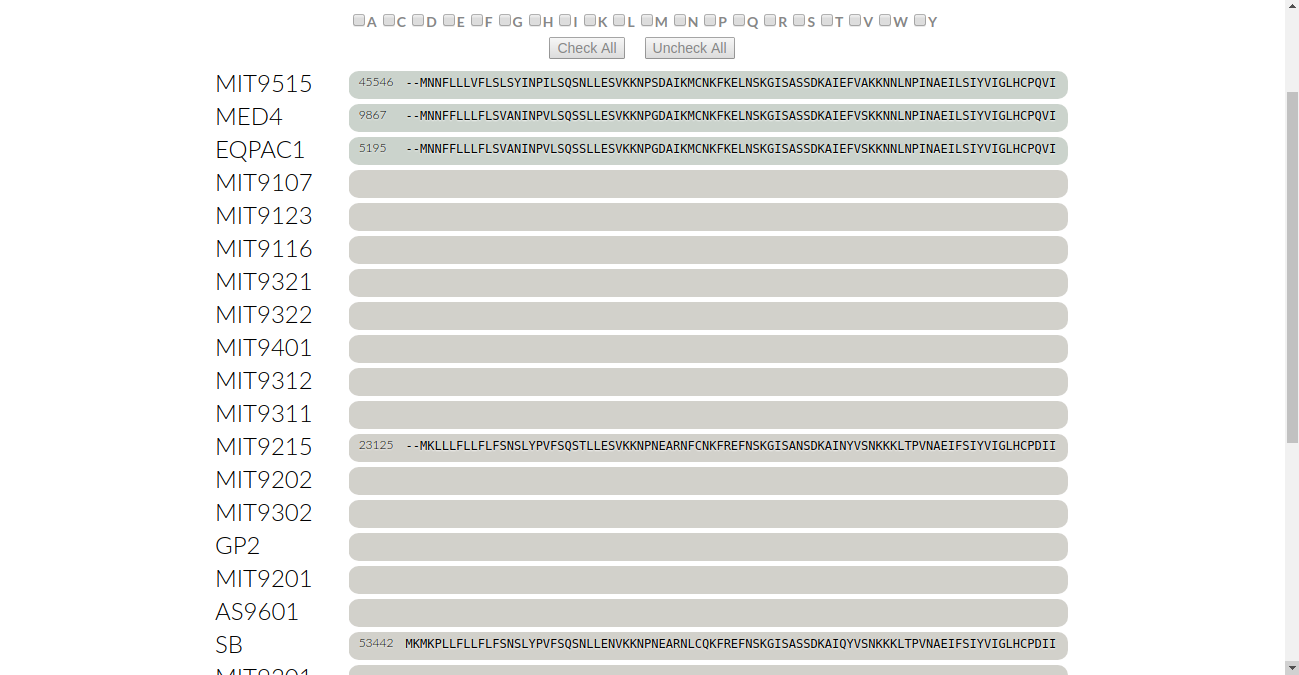 This time, we want to look at polar amino acids and see how they’re conserved in this gene cluster. As an example, let’s check for aspartate. Click on “D”: 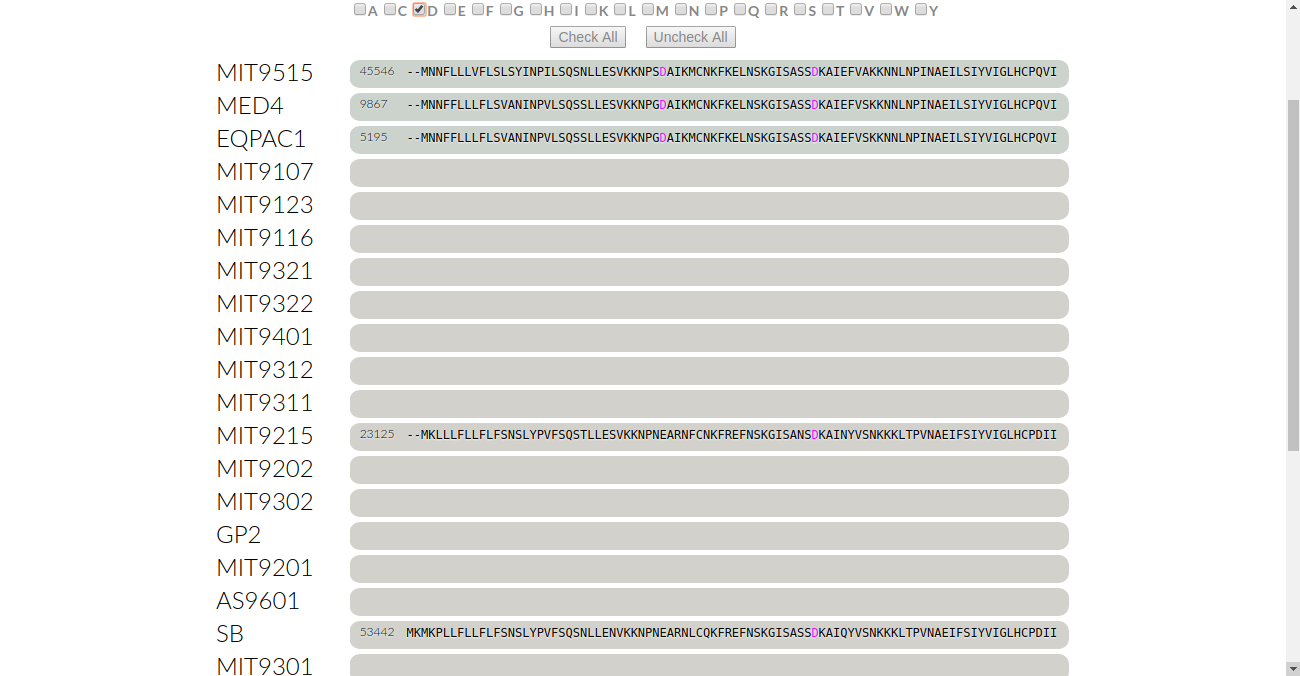 To examine the first situation of MIT9125 and SB not having aspartate, we want to check for conservation with respect to the residue that they have. Looking down the line, we see that they both have glutamate “E”. Click on “E” to see if it is conserved: 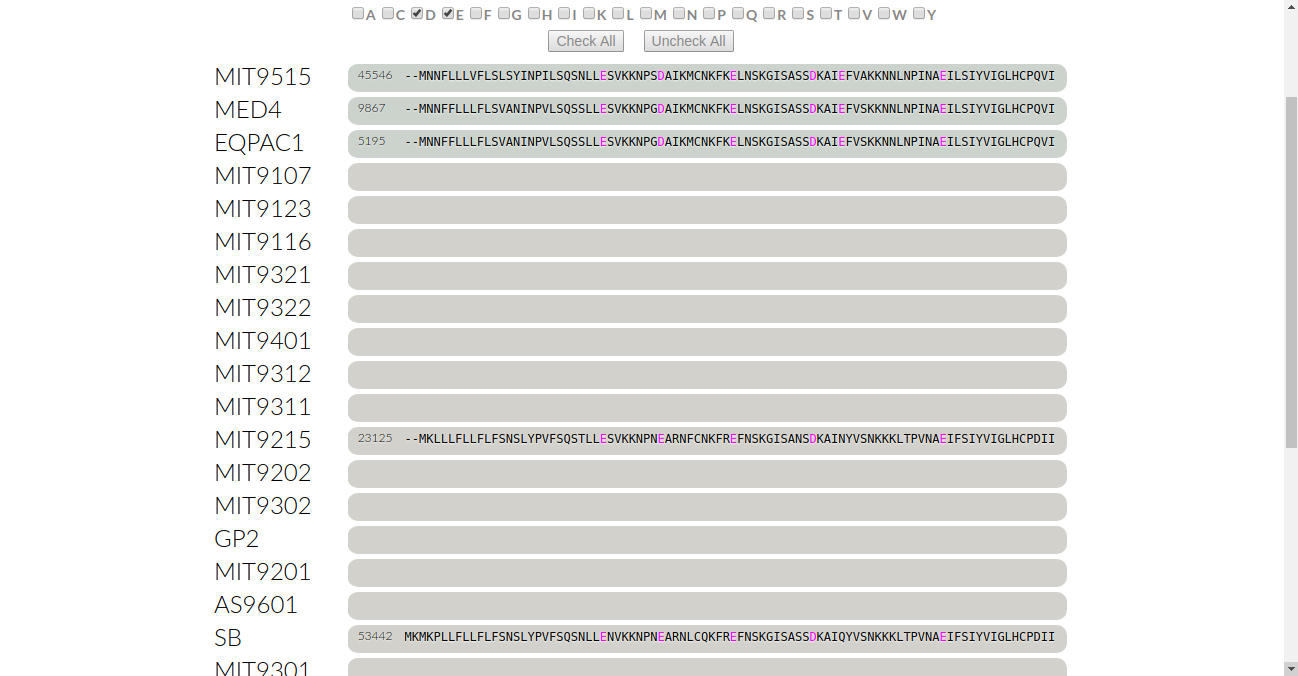 We see that both of the glutamates at this residue are colored. Thus, they are conserved because of negatively charged bonding effects (the magenta color). Now let’s look at the two aspartates that are not colored in. The remaining genomes have a glutamine “Q” in that residue. We’ll check for its conservation by clicking on “Q”: 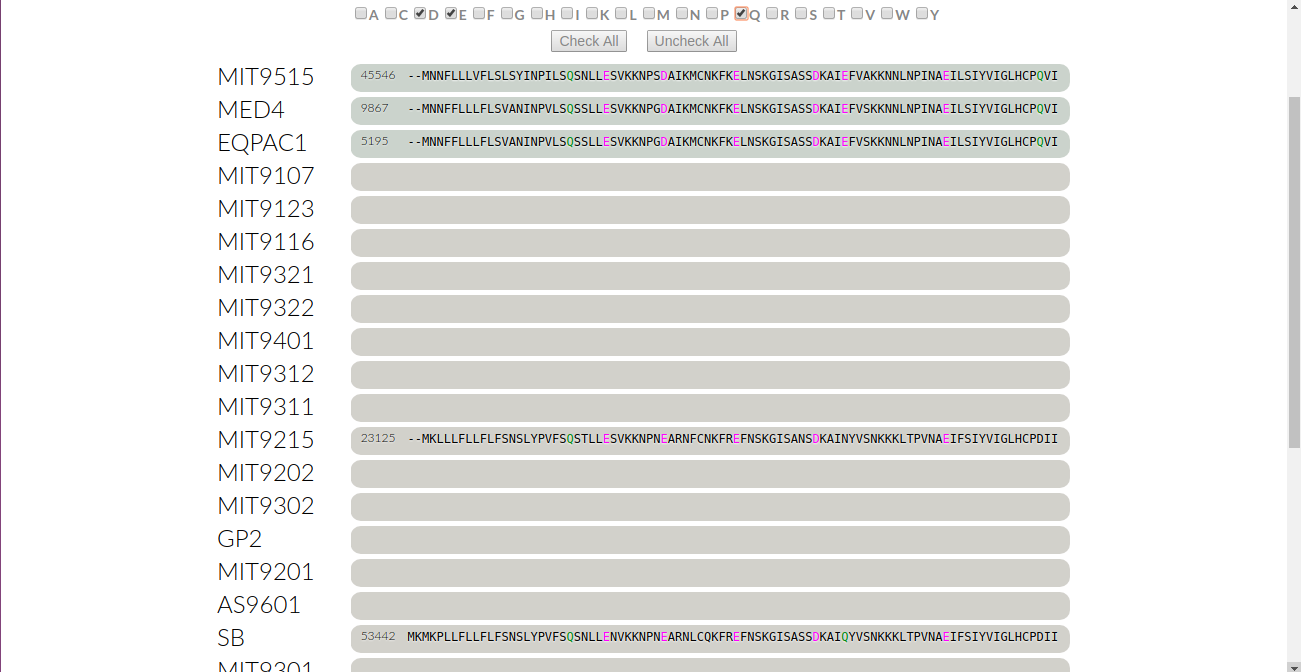 That’s it! Very simple, and easy to learn.

I hope you will find this new feature useful for your own pangenomes.

Please feel free to let me know if there are any questions.